Stellar is a platform that connects banks, payments systems and people. By Implementing money to be moved quicker, safer and at close to no cost, Stellar is used by millions. Even though the project is often seen as an alternative to Ripple, it has other uses such as the decentralised exchange which will likely determine if Stellar succeeds or fails in the long-term.

When it comes to the team behind the project, Stellar has a troubled past which raises a few questions regarding its leadership. There are also worries about the centralisation and governance of the network.

Nevertheless, the fast pace of development and adoption, make it one of the leading runners in the blockchain infrastructure race. In addition, to a high level of awareness and community support within the crypto space.

With this in mind, Stellar needs to do more in the dApp area of things in order to keep in the competitive race with other comprehensive solution projects. Its low level of use case integration enables competitors to harden their network effect.

The potential of Stellar means it could disrupt numerous markets. With it being a payment solution, it can make an impact in the virtual global remittance

There is also a possibility that a solution for the $1.7 billion unbanked people across the globe, even though its partnerships with popular remittance services such as Tempo and Coins.ph.

Stellar’s decentralised exchange solution makes the network a player in the crypto trading space too.

As reported by CryptoBriefing:

“With the use of gateways and token creation, Stellar could also penetrate traditional asset markets. This would be a much larger playground, as the total value of the global stock market alone was valued at over $77 trillion in 2017. Just in the US, an average of 18.7% of taxpayers across the country directly own stocks.”

It’s worth noting that we are not financial advisors and this is not financial advice. Investing in cryptocurrency is very risky, so only invest based on your own research and invest with money you can afford to lose, always remember to trade safe!

What are your thoughts? Let us know what you think down below in the comments

As the early Monday morning progresses, it will be interesting to see which crypto markets can recover some losses sustained over the weekend. For the time being, it seems none of the top markets show much interest in moving up again. Even the Stellar price is still down by roughly 2%, even though there are some interesting developments behind the scenes.

For those people who keep a close eye on the various crypto, token, and asset markets, it quickly becomes apparent there is plenty of exciting momentum behind the scenes of most markets. On the surface, the prices are not necessarily following these developments to a T. Stellar is a good example in that regard. While there are some key partnerships being forged as of late, the XLM value is not responding in kind just yet.

The next balance for the Stellar price is a 1.88% decrease in USD value and a 2.08% loss over Bitcoin. Neither of these trends is particularly worrisome either, but they do confirm the bear market is far from over at this point. While Stellar’s trading volume is also pretty weak, that is to be expected following a rather volatile weekend. The $0.105 price level has not come under any real pressure as of yet, but it remains to be seen if that will remain to be the case for much longer.

It appears a lot of traders have high expectations for XLM moving forward. Nick V sees the current momentum as an opportunity to pocket some gains. While it is commendable to see traders predict a bounce will occur for XLM, these markets often tend to respond in rather funny ways. As such, this trend may not necessarily materialize as expected, although anything remains possible at any given time. For now, it seems likely a small bounce could occur later in the day.

A lot of waves

Traders who are not too keen on waiting for any further downtrend or a potential uptrend can always explore arbitrage opportunities. There are two direct arbitrage options to explore. A price gap between either Binance or Kraken and Bitexen can yield speculators a potential profit of up to 1.28%. Not the most spectacular gains by any means, but it seems to be sufficient to make some people look into these options a bit more. All of these exchanges should offer sufficient liquidity to make interesting things happen.

There is also a triangular arbitrage option which can yield a much higher potential profit. More specifically, it would yield a potential profit of up to 95%, although that does require using multiple exchanges and trading pairs. Especially the final step of selling on Bitbns can be of concern, but there are some minor profits to be pocketed along the way as well. XLM is involved in these trades, which shows the price difference between trading platforms are worth keeping an eye on.

Hurry! 95.03% triangular arbitrage considering volume in #BTC via #Cex. If you buy #BTC in #USDT market from #Huobi and convert it to #XLM in #Cex and sell it on #BitBns.

For the time being, it remains a bit unclear how all of the top crypto markets will evolve throughout the day. Although Bitcoin seems to be digging itself out of a hole, there is still no decisive course of action to speak of. That usually doesn’t bode well for alternative markets like Stellar, although it seems the losses are being recuperated slowly and steadily. A push to $0.11 is not entirely unlikely, although no one should expect any immediate miracles either.
source:nulltx.
Continue Reading

Not too much exciting price action is taking place across the cryptocurrency markets as of right now. Bitcoin is firmly in the green yet most other markets note smaller gains over the past few hours. One interesting development comes in the form of the XLM price, as Stellar Lumens has overtaken Litecoin in market cap once again.

Every time the Bitcoin price tends to gain some decent value, one has to wonder how all alternative markets will respond. More often than not, the markets will go green in terms of USD gains, yet lose BTC value in the process. As a result, there is a near status quo which doesn’t allow

for many different trading options. In the case of XLM, there are solid gains in both departments, which is rather promising.

Over the past 24 hours, the XLM price has risen by over 6.5% in USD value. As such, one XLM is currently valued at $0.1219, with a push to $0.125 seeming rather plausible at this stage. There is also the 2% improvement in the XLM/BTC ratio, which pushes the value per Stellar Lumen to over 3,000 Satoshi once again. Solid gains across the board seem to confirm this uptrend is legitimate, rather than a flash in the pan.

According to the Huobi Research team, this XLM price uptrend shouldn’t come as a complete surprise. Even though Stellar Lumens isn’t in the top five of most discussed cryptocurrencies on Telegram, its sentiment index is off the charts right now. Based on that statistic alone, this price surge may very well be in just the early stages.T

It is also important for Stellar Lumens users to be somewhat cautious regarding the newly announced StellarPay project. There is a genuine concern on Reddit regarding this “fork” of XLM, especially when considering how the StellarActivity debacle went down in the end. There is always a chance this new offering is legitimate, although it is advised users always conduct their own research first and foremost.

Beware of StellarPay, it is another Stellar scam the same as StellarActivity, Shade, Dolphin, this time they have evolved, better web with better graphics (shitty logo, bad English), now they have a “team”, no private keys this time … #stellar #XLM #StellarLumens

Last but not least, it would appear a thorough technical analysis of the XLM price chart could have shown a lot of people this most recent uptrend was just a matter of time. It has been a very interesting chart for XLM these past few days, although there is no indication where the momentum will head over the coming days. Sustaining any extensive uptrend has been very difficult over the past 10 months. 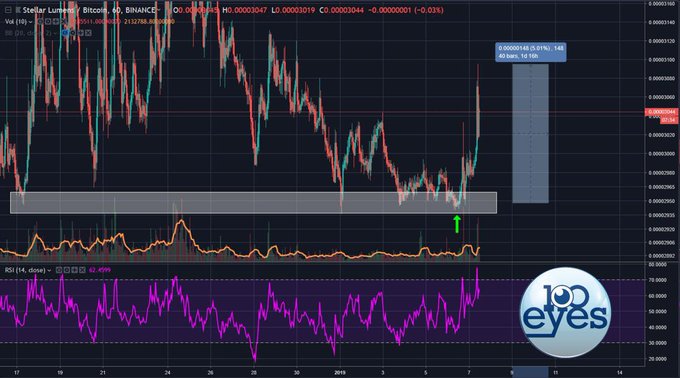 Many alts are struggling at the moment. However: very nice to see that at least XLM took off as expected. The 100eyes scanner spotted this support zone a few days ago and kept pointing it out. Finally the profits are

All signs are pointing toward a rather healthy XLM price surge in the hours to come. Extending that momentum into days or even weeks will pose a challenge of a completely different caliber. Even so, all markets benefit from this latest Bitcoin price surge, thus there is no reason to expect any real pressure unless the world’s leading cryptocurrency falters once again.

It would appear this weekend is off to a somewhat good start where the top cryptocurrencies are concerned. Most of the top 10 coins and assets are in the green, albeit some a bit more spectacularly than others. Stellar’s XLM appears to be making some moves again, a sits value seems to be heading to $0.25 once again.

XLM Price is Trying to Push Through Resistance

It has become apparent weekends are usually filled with unusual trading momentum for the top cryptocurrencies. This week will not necessarily be different, as altcoins will follow Bitcoin’s momentum first and foremost. So far, the world’s leading cryptocurrency hasn’t shown much momentum, albeit there is no loss to be noted either. A bit of uneasy momentum remains in place, for the time being.

For XLM, however, there is a gain in both USD and BTC value. The net 4.6% gain in USD value pushes XLM back to $0.235. It seems a jump to $0.25 shouldn’t take overly long, although one never knows how trading behavior develops first and foremost. There is also a 4% gain over Bitcoin, which is equally interesting to keep an eye on.

The biggest development for Stellar’s XLM this week is how the Trezor hardware wallet will support this digital asset moving forward. Although this firmware is still in beta, for the time being, it further shows there is a lot of support building for XLM as of right now. That is only normal, as developments like these allow users to keep funds safe at all times.

As has become somewhat common these

days, there are always rumors regarding Coinbase. In the case of Stellar’s XLM, there are plenty of people who hold out high hopes for seeing this asset listed on the exchange in the coming weeks. While that may certainly be a possibility, speculating on such things without official confirmation serves no real purpose

Traders and speculators are also keeping a close eye on this market moving forward. It would appear some users think there will be no further uptrend, even though this present momentum remains rather promising. There are always a lot of uncertainties where crypto and digital assets are concerned, and any uptrend can be turned into a net loss fairly quickly.

The XM trading volume, while still a bit on the low side, should be sufficient to push the price all the way to $0.25 over the weekend. Any gains beyond that point will be difficult to achieve, let alone sustain. Everyone is waiting for a major rebound right now, but it may be a while until early 2018 prices are established once again. Until Bitcoin shows some major momentum, the rest of the markets will remain subdued as well.