The recent bear attack on the cryptocurrency market had created quite a furor in the cryptoverse with several major coins such as Bitcoin [BTC], XRP and Ethereum [ETH] all seeing significant drops in value. Analysts and traders had earlier predicted the crypto-winter would last for a long time but that seems to be changing. At the time of writing, a majority of the market was witnessing green with some cryptocurrencies even seeing double-digit gains.

Tezos [XTZ], which has been lying dormant for the past few weeks has surprised holders and investors by shooting up by a massive 21.1%. The cryptocurrency, with a market cap of $370.930 million was trading for $0.611. Tezos also held a 24-hour market volume of $2.223 million which was distributed between UEX and Kraken. UEX had a total hold of $333.895 million of the total trade volume while Kraken encompassed another 13.35% of all the XTZ transactions. 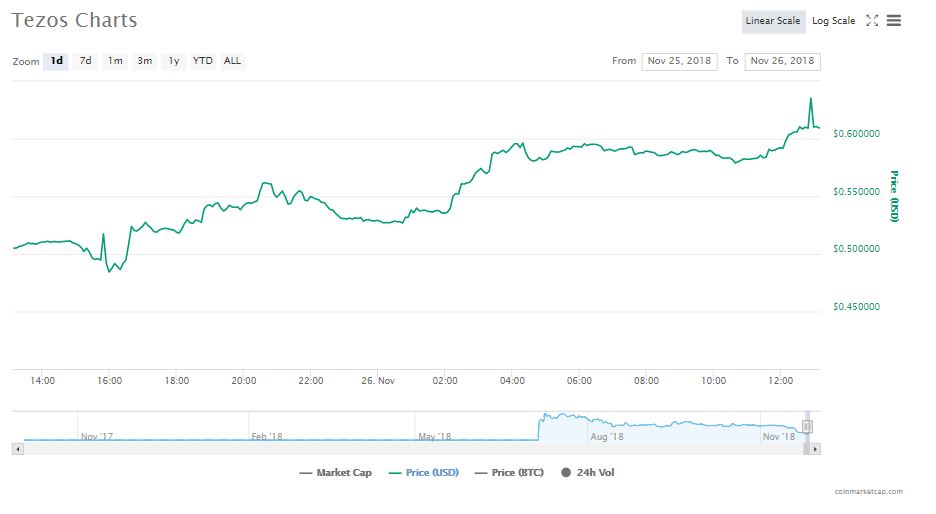 Tezos had also created a ripple in the cryptocurrency industry recently when it got listed on Kraken, the popular cryptocurrency exchange. The listing had also resulted in XTZ shooting up by a significant 13%. As of now, several exchanges support Tezos, with the 19th placed cryptocurrency making strides to push its use cases into the realm of mainstream adoption.

It has not been all rosy for Tezos, with comments coming in from the Founder and CEO of IOHK, Charles Hoskinson, creating rifts within the community. Hoskinson had said that Tezos did not pick up as much as expected because of the intentions of the cryptocurrency’s founders.

According to him, the ploy to deflect to another country to escape the wrath of United States regulators had backfired on them. The CEO’s words had come in the wake of speculations within the cryptocurrency community that compared Cardano [ADA]’s situation to that of Tezos’. In his words:

“Where it has a collection of duties and responsibilities that are for the community but whether it does these things or not doesn’t stop development does these things or not doesn’t start a partnership in business development and because of the triumph or its structure we had resiliency. So if it fails to other entities can step in and fill in for it and continue moving the project along”.