As far as the top crypto markets are concerned, there aren’t any notable gains to speak of. Nor are there spectacular losses to take note of, although that doesn’t necessarily mean these markets are in a good place right now. The Cardano price has risen the strongest out of the entire top 15 so far, which seems to indicate a lot of interesting things are happening in that market at this time.

It is not entirely uncommon to see most of the top crypto markets deal with some uneasy momentum. This situation has been in place for quite some time now, which is still a direct result of the 2018 bear market. Even in early 2019, that bearish pressure always seems to loom overhead, for some reason. Cardano is not affected by this particular development at this time, which is promising in its own right. Sustaining this uptrend will be a different matter, with the weekend around the corner.

To put this in perspective, the Cardano price has risen by 5.7% in both USD and BTC value alike. That in itself is rather interesting to keep an eye on, primarily because so many other top markets note gains of 1.5% or less. Cardano’s current value approaches the $0.05 level again,  which may prove to be a new support level or a major hindrance. Either scenario is still in play at this time.

On social media, the Ledger support for Cardano is seemingly far less important than the actual price charts. That is a sign of how this bullish run may come to a halt fairly soon. Crypto Wunderbear expects this run to improve even further, assuming Bitcoin doesn’t spoil the party. It is evident Cardano relies on Bitcoin quite a bit right now, which can prove to be very problematic in the long run. 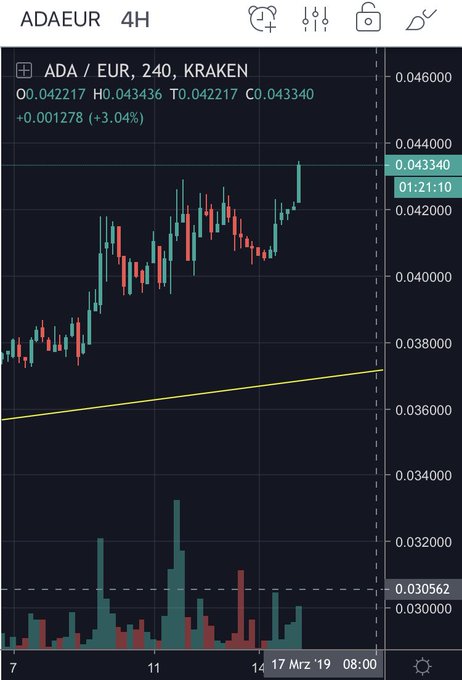 Nerubica, on the other hand, remains a bit on the fence as to how this price run will play out. Considering how there is nothing to be overly excited about as of yet, it seems this small nudge can easily be squashed. ADA’s Trading volume is also far from impressive, although that particular aspect has not been of too great concern to traders and holders in recent months. With the $0.05 level within reach, there may be a minor push in terms of trading volume over the coming days.

In case ADA does this break-out and overcomes the horizontal accumulation zone, I will become more bullish towards alts in genera

Some traders always try to make the best of the current situation. BitcoinBethke, for example, expects ADA to hit 1m330 Satoshi, which would require another 7% increase compared to the current level. However, this user also indicates it to be a short-term target, which may result in a new decrease shortly afterward. Cryptocurrencies are volatile first and foremost, with Cardano not being an exception in this regard. Although it is somewhat promising to see Cardano’s value rise while other markets struggle for traction, getting ahead of oneself is never a good sign either. For now, the lack of high trading volume and the main focus on the price, rather than actual developments, can make this a rather short-lived uptrend as long as Bitcoin remains on shaky legs. It could make for a very interesting market to keep an eye on over the weekend, though.

Ripple CEO Brad Garlinghouse is adamant that Facebook’s unveiling of its Libra cryptocurrency will lead to big business for his banking software and cryptocurrency...

When thinking about investing in Ripple (XRP), the digital coin that runs on the Ripple’s payment blockchain system, traders ought to consider what function Ripple might play...

(PRLEAP.COM) Superior Coin, a global Cryptocurrency company (www.superior-coin.com), announced today the unique use of it’s blockchain technology in regards to privacy, and security. With...