In what could be an end, or rather a climax to the Bitfinex episode, the CTO of the controversy-riddled exchange, Paolo Ardoino, confirmed the completion of the private token sale. LEO, the exchange’s native token, was curated to raise $1 billion to rectify the undisclosed losses incurred by the exchange.

Bitfinex managed to raise $1 billion in just 10 days, confirmed Ardoino. The CTO added that participants in the token sale included “giants in our industry and outside.” The exchange in their whitepaper had confirmed that the private sale would be geared towards institutional investors, and the CTO confirmed that the invested sum was over $1 million each, attesting the same.

Talking about the LEO sale, the CTO stated that the exchange was “trustworthy,” and that investors paid testament to the same by participating in the private token sale. He added that they want Bitfinex to “keep fighting for the industry whole,” recognizing that these were their words. 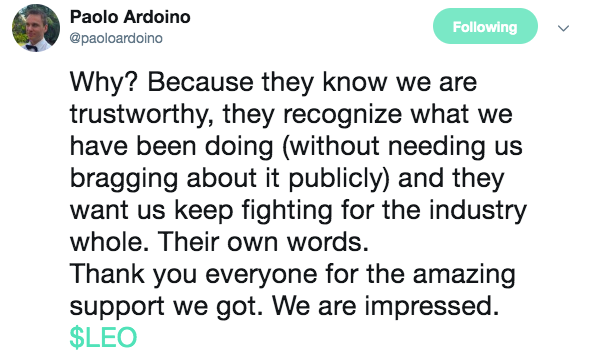 In the whitepaper, Bitfinex had stated that LEO tokens could be purchased using the stablecoin Tether [USDT], which is operated by the common parent company iFinex. This was another reason for many in the cryptocurrency community to suspect the intentions of the exchange.

Of late, due to tensions with Bitfinex, BTC’s price on the exchange exhibited a considerable spread over other exchanges. However, that spread had reversed and BTC price on Bitfinex dipped below other rival exchanges like Coinbase, Bitstamp, and Gemini, after weeks of trading significantly above the same.

Ardoino clarified that the sale included “USDt or USDt equivalents,” after some confusion with eToro’s Mati Greenspan who questioned the $1 billion USDT sale corresponding to the stablecoin’s overall market cap. The CTO stated,