It’s worth to note that Bitcoin within just 45 days (approximately), saw a huge rally and is all set to hit a new record of 9 month high.

Besides Bitcoin, other altcoins flourishing on the coinmarketcap today are Binance Coin and Bitcoin Cash as they gained a significant trading boost to become the top gainers at the crypto market cap. The former achieved a growth of 16.70% whereas the latter saw an 11.60% growth within the past 24 hours respectively. 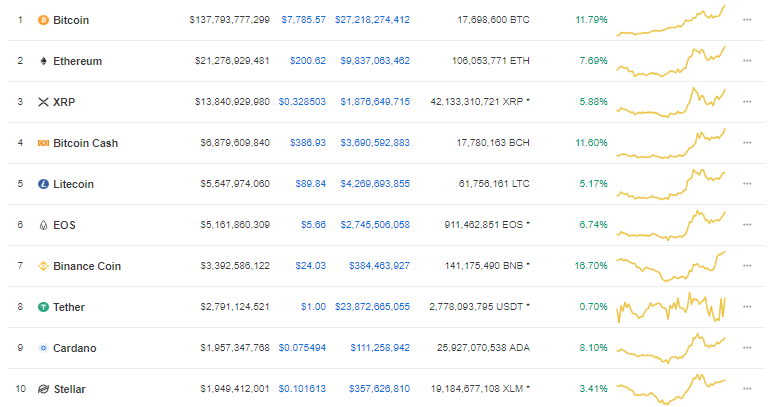 Besides BNB and BCH, Bitcoin poured its blessing on all the other major altcoins such as ETH, XRP, LTC, EOS, USDT, ADA, XLM. Nevertheless, reports earlier highlights that the performance of Bitcoin in terms of recovery is far greater than the other financial products.

Concerning the similar regards, CNBC media posted the comparative status of Bitcoin v/s S&P 500 which reveals Bitcoin has succeeded at 107.34% in comparison to S&P 500 which is up with 12.06%.

Can Bitcoin Repeat the history, the crypto bull run of 2017?

The ongoing rally seems amazing and it rekindles the memory of 2017’s which was called ‘bubble’ by many and monumental feat for the crypto ecosystem by others.

However, many analysts such as Mike Novogratz and Fundstrat’s Tom Lee predicted positive price growth of Bitcoin in 2019, who believed Bitcoin will achieve a significantly high price in 2019. Moreover, Mr. Lee strongly pointed out that the major contribution of institutional investors/customers will be the key reason behind the bull rally of Bitcoin this year.