The TRON-Tesla tryst is one that has arrested the attention of the cryptocurrency community on Twitter. Following a botched marketing ploy by Justin Sun in March 2019, the Tron spearhead finally made amends on his Tesla promise. However, Sun failed to go all in on his promise.

On March 12, to celebrate the success of BTT, USDT, and Tron, Sun had announced a “$20, free cash airdrop.” In addition to the same, he stated that he will “randomly pick” a winner to receive a Tesla.

According to John Galt, the first draw went to a bot account and the 87 winners were the same person. The Tesla winner, @uzgaroth, was asked to provide his contact details by Sun, followed by the CEO promptly deleting the tweet and all mentions of the winner.

Following @uzgaroth’s tweet asking the crypto-community if he’d been scammed, Sun short-changed the user with a trip to the niTROn 2020 conference, instead of the Tesla, triggering a calamity of Twitter memes to the effect.

However, nearly one and a half months after the episode, Sun revealed another winner, Lee Huynh. Funnily enough, Huynh would not receive the electric car, but a USD-equivalent of the same, or close enough. Sun’s tweet read,

Picking up where the Tesla controversy left off in March, crypto-Twitter resumed its criticism of Sun. Many online not only questioned the lax sidelining of @uzgaroth and the announcement of a new winner, some also speculated on the price of the Tesla and its USD equivalent

Regardless of the conversion and the USD price of the car, Huynh does not plan on purchasing a Tesla. Instead, “the winner,” stated that he converted his reward into TRX. Leo Huynh tweeted, tagging the former “winner” as well,

A few minutes after revealing Leo Huynh to be the “winner,” Justin Sun made good on his earlier promise to @uzgaroth, stating that the latter would be the “2nd winner” and that a sum of “28,000 $USD value of #TRX” would be awarded to him as well. Sun tweeted, 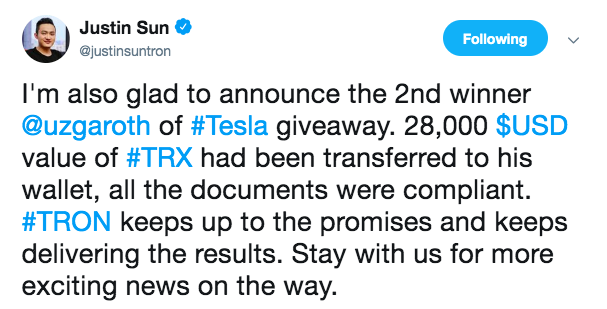