The cryptocurrency market saw an unprecedented rise in prices as Bitcoin [BTC], the world’s largest cryptocurrency, rose from its hold near the $4000 mark to break the $7000 threshold. During this bull run, other altcoins such as Tron [TRX] also received a boost as its 24-hour trading volume increased hand in hand with its price.

Last time #TRX had a 24-hour trading volume surpassing 1 billion USD was on May 1, 2018 – one month before TRON Mainnet launch over a year ago!
Good times ahead for all $TRX hodlers & users.”

Despite the price hike, the Justin Sun-led cryptocurrency was still in the 11th position and was not able to breach the top-10 cryptocurrency club. At the time of writing, Tron held a 24-hour trading volume of $1.142 billion, with a total market cap of $1.927 billion. When compared to the top ten cryptocurrencies, Tron’s 24-hour growth of 9.54% was only second to that of Ethereum’s 10 percent growth. 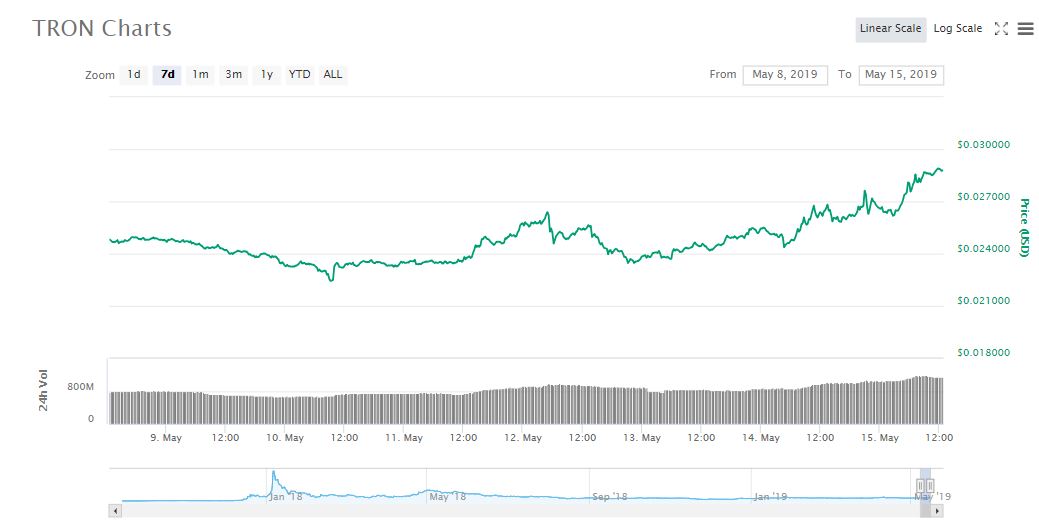 Sources also revealed that Tron surpassed the $20 million mark amassed from its 425 DApps. A tweet read,“#TRON reaches its highest daily USD volume in months on its 425 DApps, befittingly surpassing #EOS on the eve of #Consensus2019

Tron was also in the news recently after Justin Sun announced that BTT will be officially launched on the Tron network in the second quarter. The Tron Foundation has been very active in its pursuit of bringing in more players to the realm of blockchain, an effort that was extended to the mainstream adoption of BTT. Tron’s CEO had tweeted,“Glad to also announce another tech giant with hundreds of millions of users will be enabling #TRON ecosystem in Q2 as well. Guess who? To be revealed soon on #Consensus2019.”