Bitcoin’s latest price swing has precipitated quite a stir in the cryptocurrency market. Its impact was felt across the decentralized finance sectors as well, as the world’s largest cryptocurrency’s surge propelled a fresh all-time high for Bitcoin locked in DeFi, a figure that sprung to 4.04k on 3 June, doubling from 2.23k less than a month ago.

Meanwhile, Ethereum locked in DeFi continued to be relatively small. The total value locked [USD], however, noted an uptick, a development that coincided with the positive movement of the crypto-assets in the larger market.

The figure for Bitcoin locked in DeFi exploded last month after Maker Governance held a vote that decided to use WBTC as collateral to the Maker protocol. Since then, the total value locked in WBTC has also risen substantially, notably hitting a new high on 2 June when it climbed all the way to $39 million. Wrapped BTC or WBTC is essentially a way to transfer BTC onto the ETH blockchain, one that requires trusted third parties to facilitate the same. WBTC is pegged 1:1 with BTC. 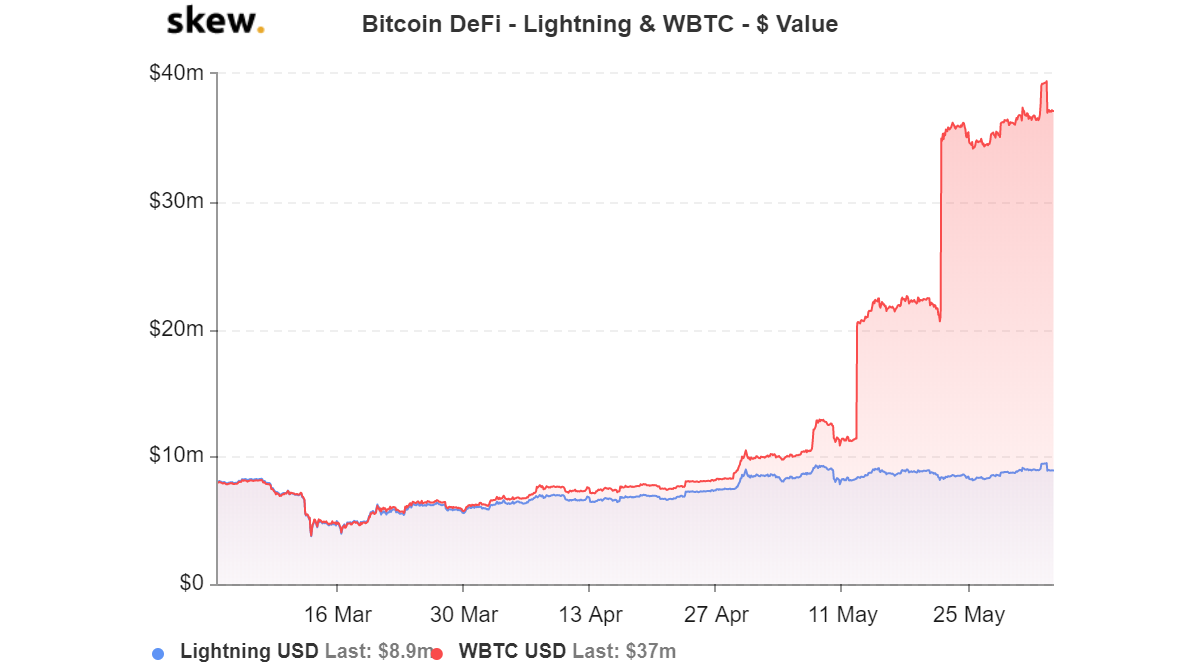 At the time of writing, 9.937 million Dai had been minted with WBTC as collateral, according to DaiStats. As Bitcoin’s value reached the highly coveted level of $10,000, the interest in WBTC grew for those looking to earn value and leverage the liquidity of Bitcoin.

Additionally, from the attached Skew chart, it can also be noted that at the time of writing, the WBTC locked in the Ethereum blockchain stood at $37 million, while that of Lightning Network’s stood at $8.9 million only. This was indicative of the fact that a huge chunk of Bitcoin liquidity is currently flowing into the ETH blockchain.

Additionally, the total BTC locked in Wrapped BTC also touched an ATH at 3.91k, a positive development that implies a reduction in the volume of Bitcoin in circulation. And owing to basic supply-demand principles, this would mean that the demand for Bitcoin will inevitably grow, something that would be reflected by the cryptocurrency’s price.