Bitcoin saw some further turbulence this morning after it plummeted to lows of $9,400 before rebound.

The climb seen in the time since has led it into the upper-$9,000 region and it does appear to be poised to retest $10,000 in the hours ahead.

The resistance here has proven to be massive, however, and could be enough to halt any potential momentum that the crypto incurs in the near-term.

It does appear that this movement has been driven primarily by trading activity on OKEX, as the premiums and open interest on this exchange rocketed just prior this volatility taking place.

This marks a notable rebound from recent lows of $9,400 that were set during an early-morning plunge that proved to be short-lived.

Buyers quickly stepped up and absorbed this selling pressure, with the bounce here being enough to spark what appears to be a short-term uptrend that is leading the crypto towards the coveted $10,000 region.

The resistance in this area has proven to quite extreme over the past several weeks and months, which suggests that it will not be easily surmounted by buyers in the near-term.

It also remains unclear as to whether or not buyers will be able to break through the selling pressure here due to there being little change in the cryptocurrency’s underlying strength.

This movement could also just be the result of trading activity on OKEX – possibly making it fleeting.

One trader recently pointed to a surge in both premiums and open interest on the platform, noting that one trader in particular could be behind it. The below chart reveals this trend: 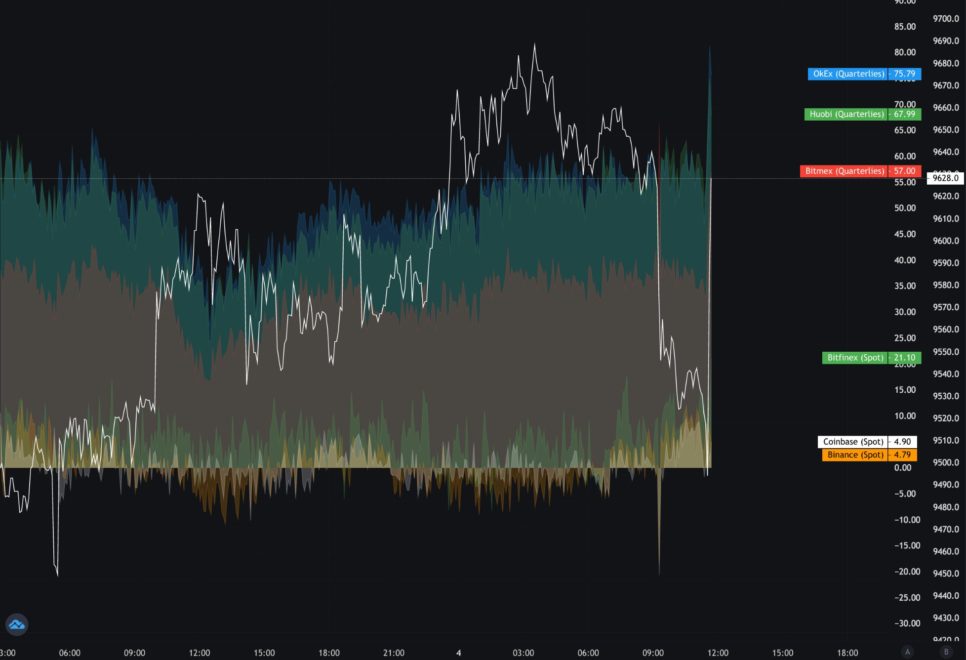 Although there has not been any major change in Bitcoin’s underlying strength since it was last rejected in the $10,000 region, one analyst believes the strong rebound at $9,400 was just what BTC needed to spark a sharp rally into the five-figure price region.

The strong price action / recovery from that quick dip to 9400 is exactly what we need for continued momentum back above 10K. I’m confident that the vertical aspect of the first leg of my drawing has a high chance of being correct. I’ll re-assess the rest later,” he explained.

In this article:Crypto, Cryptocurrencies, Featured, OKEx