Automated Teller Machines, more popularly known as ATMs, have been in our lives for more than fifty years now, first making their debut at Barclays’ Enfield Town branch in north London.

Since then, it has been the backbone of the retail payments landscape and continues to play a central role in it. Its introduction, in fact, marked the emergence of contemporary digital banking. Fast forward fifty years, at a time when a plausible alternative currency from paper notes to digital bits called Bitcoin has managed to challenge every single idea of what we know about the medium of exchange, ATMs are still functioning as a physical access point.

However, unlike existing ATMs, these do not just dispense cash. These special ATMs enable the purchase and sale of Bitcoin using cash.

These machines are not ATMs in the traditional sense since they do not connect to the bank account, but instead connect the user directly to a Bitcoin exchange.

Hole in the wall

It was on 29 October 2013 when the first-ever Bitcoin ATM was installed in Canada. Seven years later, the industry is showing no signs of slowing down. 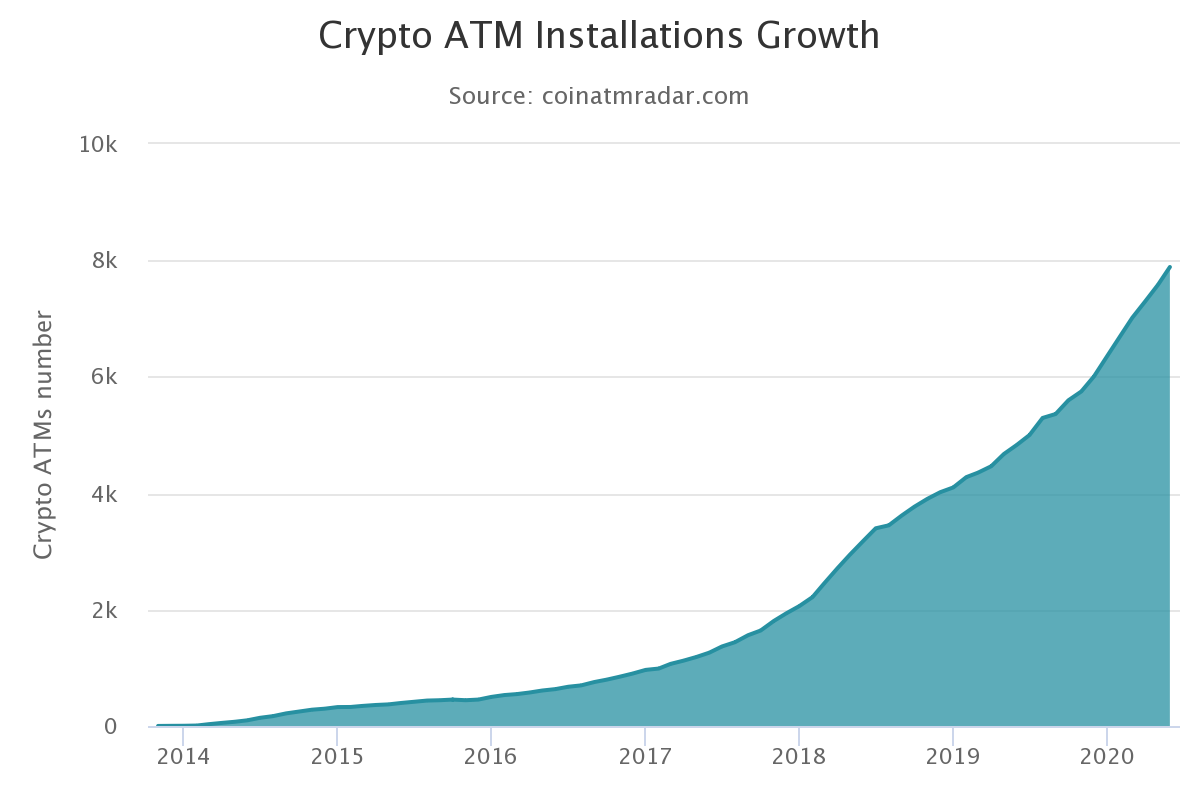 As of 29 May 2020, there were 7,886 cryptocurrency ATM installations, according to the Bitcoin ATM tracking website Coin ATM Radar. The growth of such ATM installations has consistently followed an upward. In fact, since the beginning of 2019, there has been an increase of 90 percent. Despite Bitcoin’s frantic price movement and multiple pump and dump cycles, however, the growth has been significant.

Notably, the number of crypto-ATM installations did not appear to correlate with Bitcoin’s price actions.

Bitcoin had a good start to the year. There were 432 new machines installed in January, catapulting the total figures from 6,377 to 6,705. Out of which, 104, however, shut down their operations The net growth was observed to be +328, meaning a 5.1 percent increase.

In February as well, when the price of Bitcoin breached the psychological level of $10,000, the numbers maintained a stable rate of growth, rising by 5 percent. The following month, unlike the price of the Bitcoin which decided to go north, the number of crypto-ATM installations continued to increase. 484 machines were installed, out of which 108 shut down their shops and a growth of 5.4 percent was noted.

In the second quarter of the year too, the number of installations recorded a growth of 5 percent.

So, how do they work? There are currently two types of ATMs. One is the ‘Buy Only’ ATM which constitutes 67.7% of all ATMs, whereas some kiosks have bidirectional functionality i.e. ‘Buy & Sell’ ATMs that account for 32.3%.

It has been nearly seven years since Bitcoin ATMs popped up. Interestingly, the growth in the crypto-ATM trend was witnessed in parallel to the present cryptocurrency market.

According to a CoinATMRadar’s report, a large percentage of firms who shut down their businesses ran in just one to ten locations. These ATM operators closed on a small scale and lasted for a year and a half, on average, meaning that either they were not able to scale their business or decided to sell hardware/business to larger companies.

To top that, it was also found that for firms with a higher number of machines in their network, the probability of closing businesses was low, meaning the more machines an operator had, the longer the business seemed to operate.

This could be due to a change in regulatory framework or acquisition by some other larger firm. The latter leads to centralization issues in which large firms take over the newbies. This trend has been prevalent since the last 2-3 years.

Everything comes with risks

Running a Bitcoin ATM is not an easy task and has its fair share of obstacles.

Exchange fluctuation risk is something that an operator faces when he/she purchases Bitcoin and holds them for quite some time. In this case, there is a time lag between the time of purchase and the sale of those coins by the operator. For the purpose of smooth operations, there should be some amount of liquidity available in the hot wallet. So, over time, this value of these locked-up funds will either increase or decrease over the period which depends on Bitcoin’s price action.

However, this can be eliminated by performing a process called “mirroring deals” on exchanges. Here, in addition to the liquidity on the hot wallet, the operator holds funds on exchanges, meaning, the moment a buyer purchases coins from the ATM, the machine operator buys the same amount of Bitcoin back from exchanges. However, this, in turn, gives rise to something called ‘counterparty risks’ which CoinATMradar explained as,

“If the exchange goes belly up, which happened partially with the Bitfinex hack for example — then the operator can lose funds stored on the exchange partially or in full. Some operators were affected recently as Bitfinex was a large exchange and many machines were running integrated with it.” 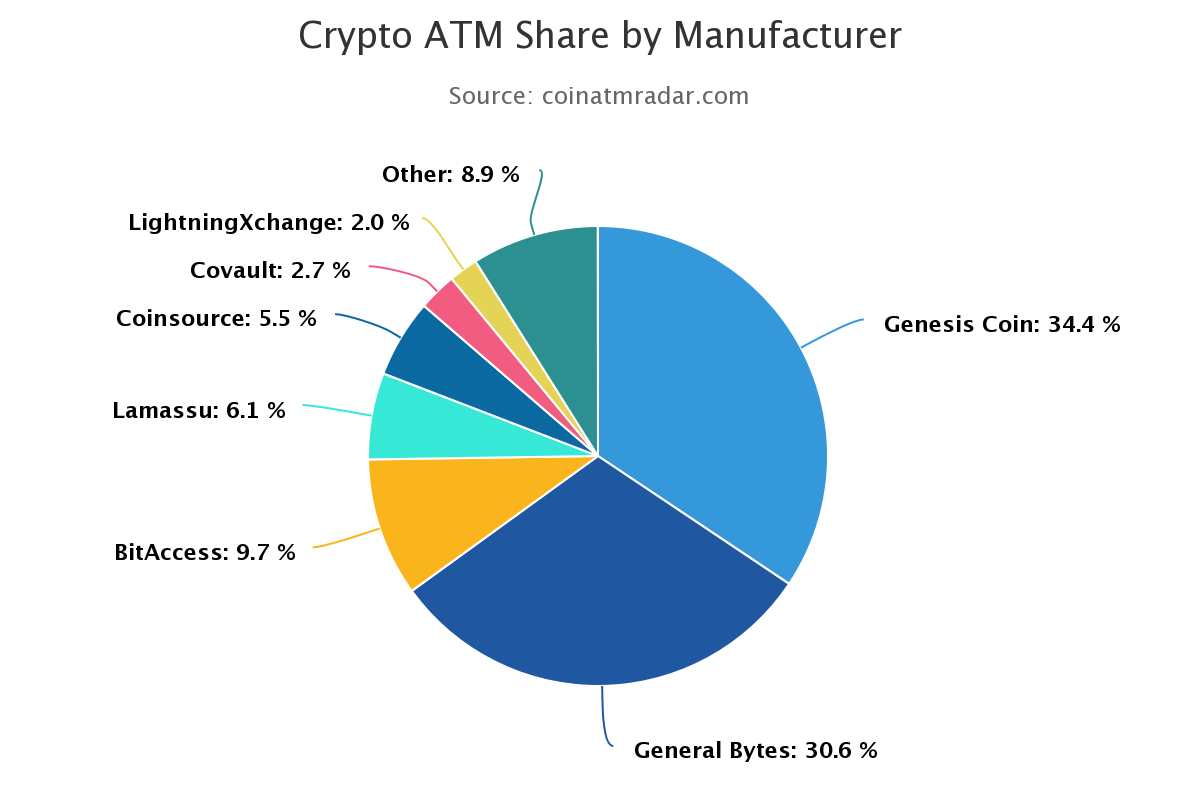 The expansion of the Bitcoin ATM marketplace in the still-nascent industry has been nothing short of remarkable. The growth of installations was seen expedited in the U.S, a country that currently contributes to 73.6% percent of all such ATMs. However, this has not been the case with the European market after it noted a period of stagnation since not many new ATMs were installed for quite some time, possibly due to AMLD5 regulations.

The European Union’s 5th Anti-Money Laundering Directive or AMLD5 essentially mandates that member states begin regulating crypto-assets and that crypto-service providers such as exchanges and custodial wallet providers would now be covered by the same regulatory requirements as banks and other financial entities.

Besides, the machines in the U.S are mostly Buy functionality ATMs. The majority of machines in Europe, on the other hand, support both buy and sell cryptocurrency for cash. Also, the fees charged by operators in Europe are in a lower range than that of the U.S.

Bitcoin ATMs in Asia currently stand at 1.6 percent, with HongKong contributing most of it. According to a recent report, the global Bitcoin ATM market is expected to reach $147.9 million by 2025 from $7.1 million in 2017. Additionally, it is projected to grow at a CAGR of 56.9 percent over the period of 2018 to 2025.

This might be a decentralized space, but regulation has to be followed. Chris McAlary the Owner of Bitcoin ATM Coin Cloud, in a recent conversation with AMBCrypto, stated,

“First, there’s federal regulation, which primarily involves FinCEN MSB Registration. You have to maintain an AML/KYC policy, appoint a full-time compliance officer, undergo independent audits, have a transaction monitoring system, and file ongoing reporting to the IRS. Secondly, you have to follow state regulation for each location.”

According to McAlary, it’s getting a green light with respect to the latter that has been challenging since states, more often than not, do not have any official policy yet for digital currencies or their business models.

“We build our machines in-house and derive our revenue primarily from buying and selling digital currencies at an exchange-rate premium. Our sole goal with our manufacturing is to get as many digital currency kiosks out into the world as possible and build the infrastructure for economic freedom.”

The cost of operating a brick-and-mortar exchange business is always expensive. McAlary explained,

“For example, we sublease a 16” square space from our host locations, which are usually gas stations, convenience stores, and supermarkets. Their retail floor space is a valuable asset.”

Additionally, the rent costs also vary by location and depend on their foot traffic, sales revenue, and hours of operation. There is also a cost for the compliance process, one that includes registering as a Money Services Business [MSB] as well as having a full-time compliance officer on staff to execute a Bank Secrecy Act compliance program.

McAlary also added that cash logistics, including armored truck servicing and cash pickup, come at a price as well, which again are not the same in every location, but instead vary by region, distance, and time required to service the Bitcoin ATM.

Then comes the banking fees that go along with running MSBs, Bitcoin-related businesses, and cash-intensive businesses.

“Since Bitcoin ATMs fall under all three categories, the fees to maintain operating checking accounts are costly. Of course, physical machines also incur repair and maintenance costs, as well as the operational risk of theft and vandalism.”

While all these things are of utmost importance, they all come with costs. Hence, making the convenience of using a Bitcoin ATM available is way costlier than purchasing and selling digital currencies on an online exchange.