Bitcoin’s price has been struggling to surpass the $10k resistance for a long time now, with every brief breach followed by a dip in the charts. This has been the case over the past few weeks; however, such an inconsistent narrative appears to have affected the king coin’s popularity in some parts of the world. According to a recent report by Longhash, the Bitcoin search index fell sharply to a new low over the past month.

China’s prominent search engine, Baidu has been reporting low searches for the world’s largest digital asset. In fact, according to the attached chart, the search volume fell sharply to 15,666, as of 13 June, when Bitcoin closed at $9,473.46. This is an interesting finding since the search volume had noted a peak when June began. This was also around the time when Bitcoin registered a prominent surge on the charts, with BTC climbing by a whopping 9.72% within 23 hours.

However, as BTC failed to hold on to this value and slumped in the hours soon after, it presented a good buying opportunity for traders. As the traders tugged at Bitcoin’s price from both ends, the value of the crypto-asset reached a point of stagnation, with many users losing interest. After 5 June, the search volumes on Baidu took a hit and there could be an inverse relationship between the price and search visible in the weekly Baidu search chart.

The restricted searches for Bitcoin in China could be a result of the country’s “Blockchain, not Bitcoin” narrative. However, other metrics have also contributed to this, factors such as the onset of a pandemic. According to LongHash, the number of media reports on Bitcoin has remained low, with the same spiking just once towards the end of May and towards the beginning of June – the same period as when Bitcoin’s price rallied. 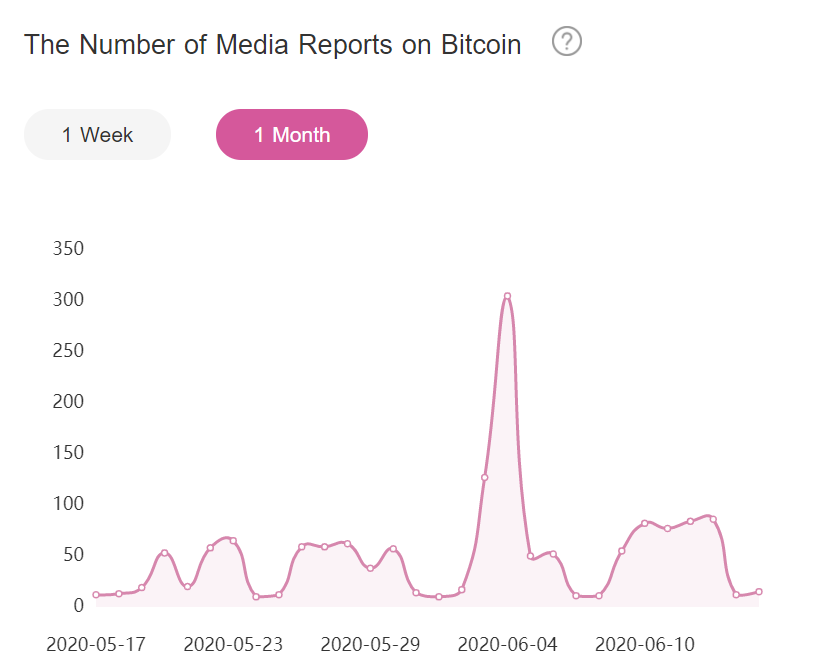 The peak was at 305 on 4 June, a figure that fell to just 50 on 5 June. Meanwhile, the blockchain-related WeChat Official accounts were on the rise, reinstating the importance given to blockchain in the country. China, in early 2020, had also noted a significant dip in the trading volume of Bitcoin after it hit a two-year low on the peer-to-peer exchange, LocalBitcoins.