The cryptocurrency market has almost recovered from the recent correction; however, some coins remain in the red zone. Primarily, XRP, Bitcoin Cash (BCH) and Bitcoin SV (BSV) have declined over the past 24 hours. On many digital assets charts, a triangle model is forming, the breakdown of the upper border of which implies a continuation of the current trend. However, buyers’ reluctance to move higher could increase the likelihood of a downward correction.Top 10 coins by Coinstats

On the daily chart, Bitcoin (BTC) continues to correct near the important resistance level of $12,150. The nearest support area is located at $10,605. 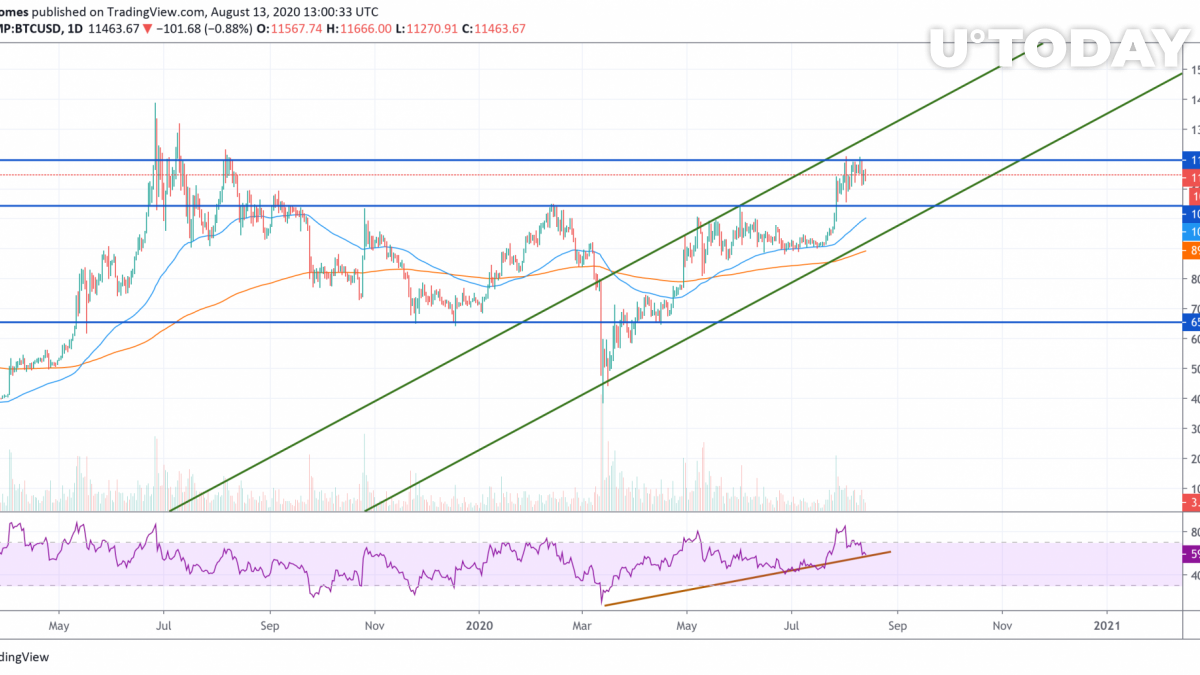 The values of the RSI indicator practically tested the support line, which could provoke another attempt to increase the value of the asset. One should not rule out the development of a minor correction with the test of the support area at the level of $10,605.

After that, traders can expect a continuation of the rise to the potential target at $13,865. Cancellation of the positive option will be the breakdown of the lower border of the ascending channel with the price fixing below the $10,500 level. In this case, the target of the decline may be the $8,690 mark.

XRP quotes are back below the upper boundary of the rising channel. Bear pressure remains. 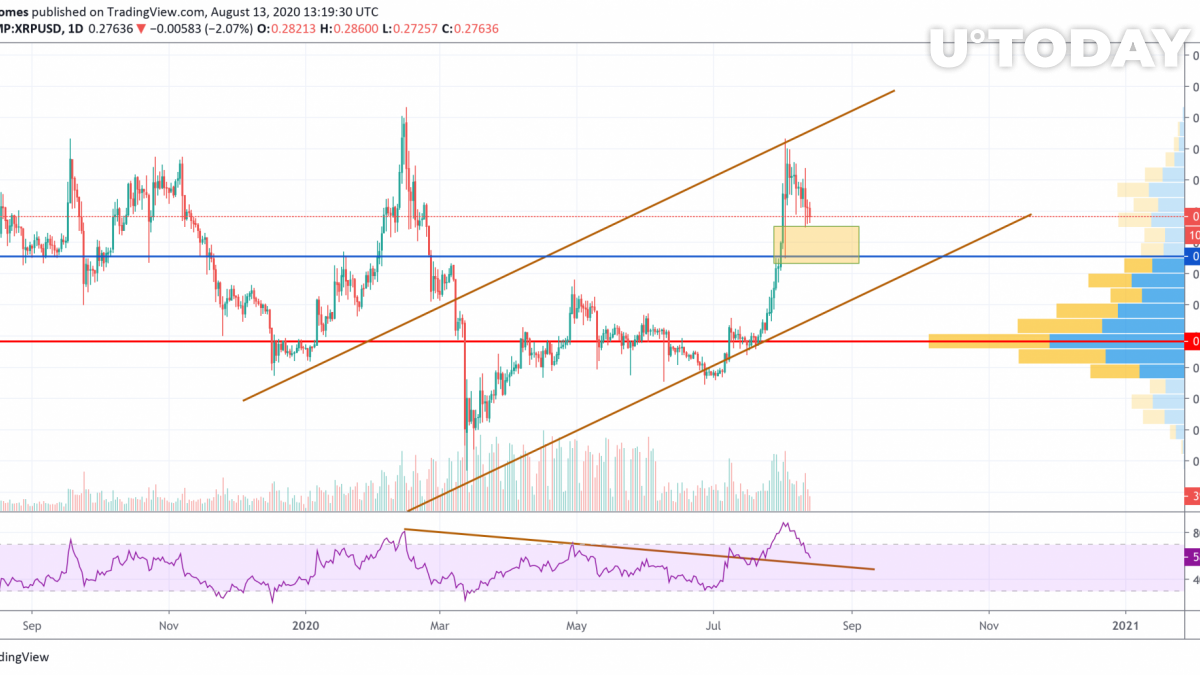 For continued growth, it is important to go beyond the $0.33 level again. An additional signal in favor of the price rise is the test of the support line on the RSI indicator. Cancellation of this scenario may mean a breakdown of the support area with the price fixing below $0.234, in which case the price can be expected to fall to $0.216.

Even though the rate of Cardano (ADA) has risen by 1.46% over the last day, the short-term scenario remains bearish. The price change over the last week has made up -4.55%. 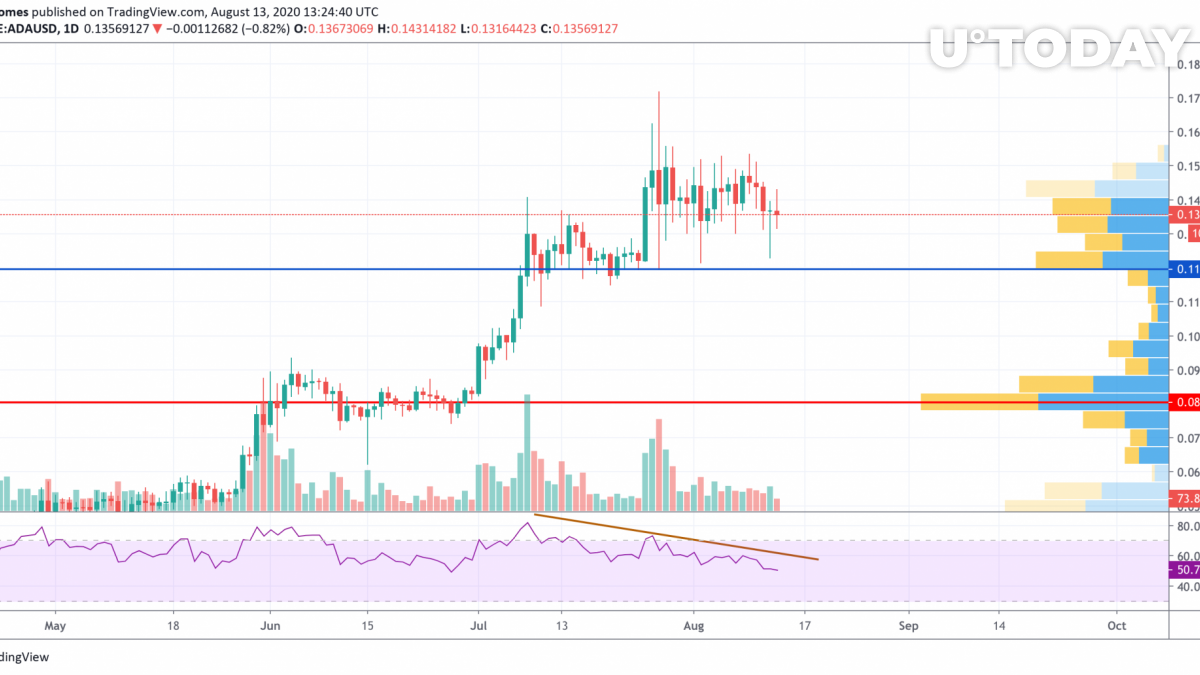 On the daily chart, Cardano (ADA) has entered the correction phase based on the long wicks. Also, the trading volume is going down slightly, which means that the drop is likely to continue. What’s more, liquidity is low, which is another reason for an upcoming decline. In this case, the nearest support is $0.1196, which may be attained shortly.

EOS on the daily chart continues to trade above the support level. There is potential for a rebound and a continuation of the rally toward the first target of $3.50. An additional signal in favor of such a scenario is a rebound from the trend line on the RSI indicator, where a new test is likely after a breakout. 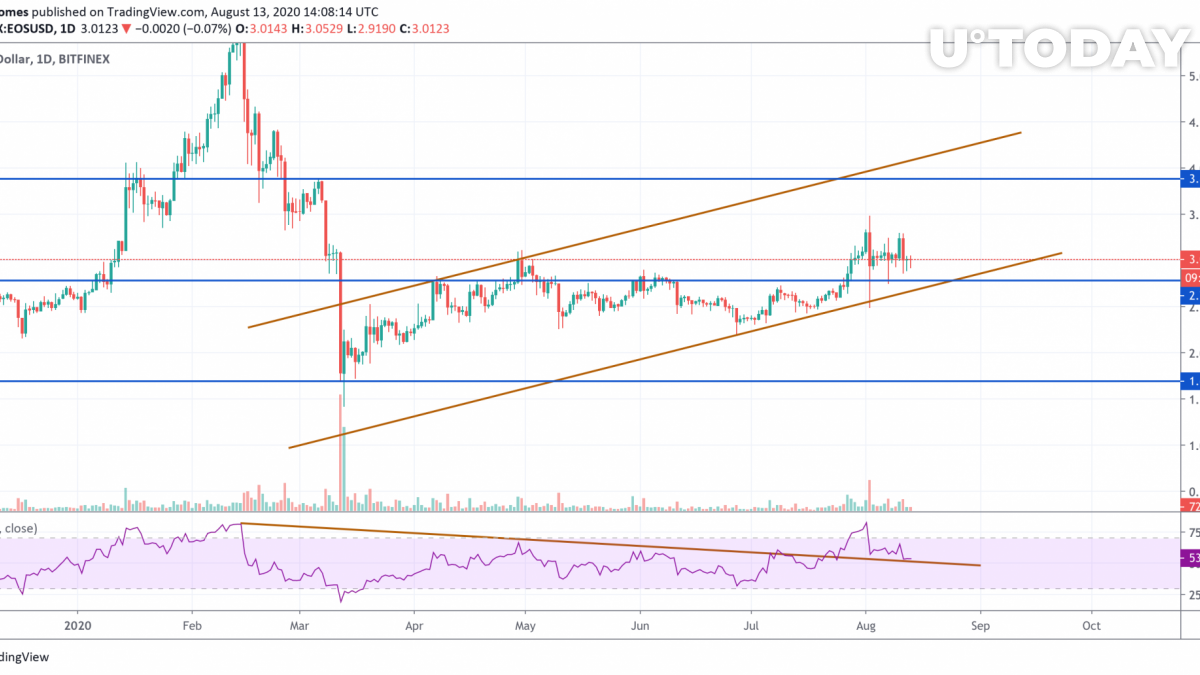 The cancellation of this option may mean a breakdown of the lower border of the ascending channel with the price fixing below the $2.50 level. In this case, we would expect a continuation of the fall to the $2.15 level.

Dash is among our losers today, as the rate of the altcoin has gone down by more than 2% since yesterday. 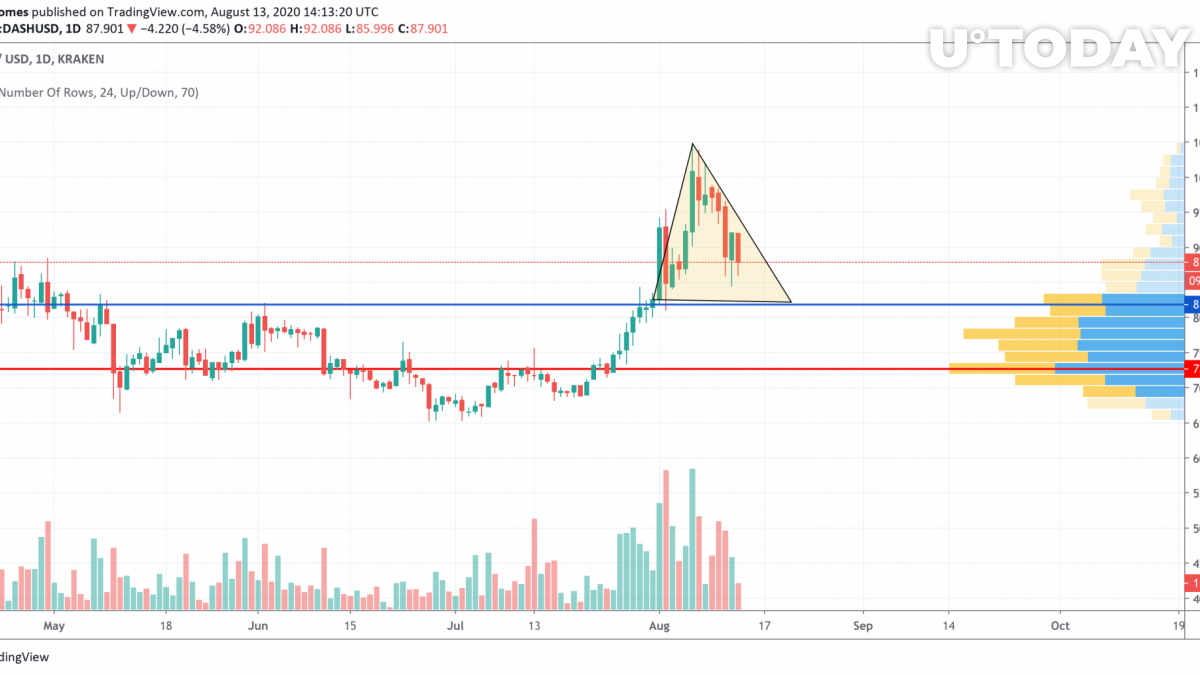 According to the chart, DASH is going down amidst a decreasing trading volume. A further drop is more probable than growth as there is no liquidity to hold the rate of the coin at the current levels. DASH is forming a triangle pattern at the moment with an endpoint of $81.86 likely by the end of the month.

DASH is trading at $88 at press time.

WaykiChain Governance Coin (WGRT) is a relatively new coin as trading started at the beginning of summer 2020. 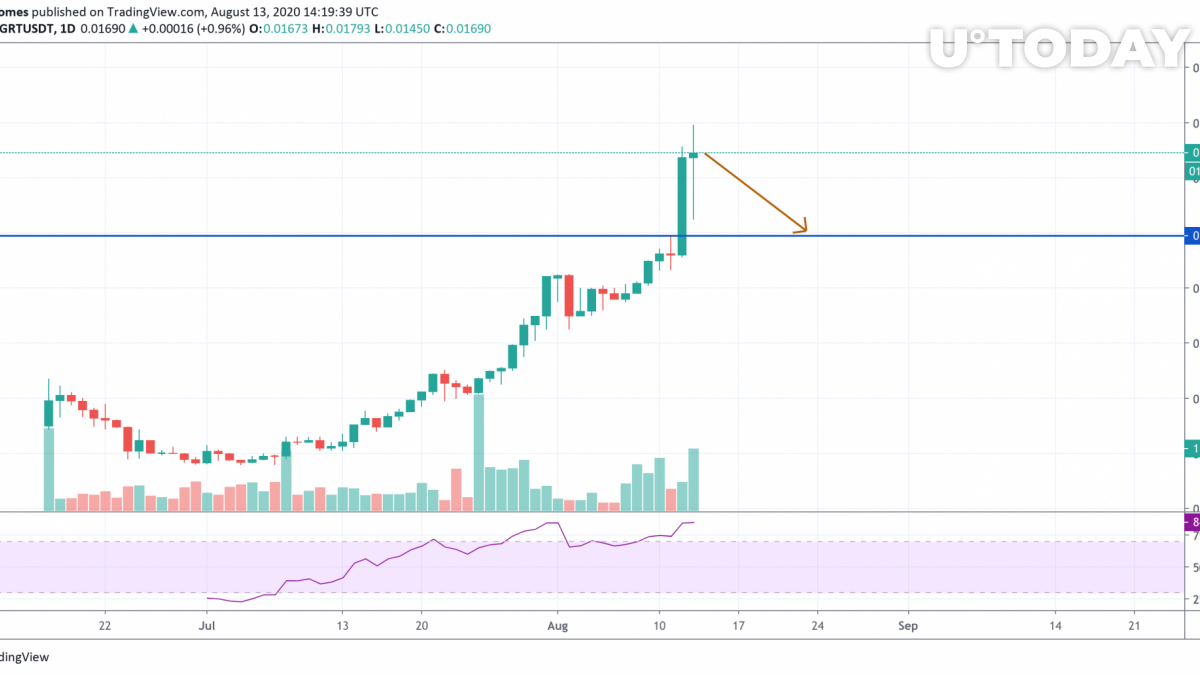 WGRT has shown significant recent growth. Once it started to be traded, the coin has been rising for most of the summer. From a technical point of view, the bullish trend remains relevant. However, the altcoin may face a correction to gain more steam for further growth. Besides, the value of the RSI indicator is already located in the overbought zone, which considers a possible decline. In this regard, the closest support is at $0.01390 and may be attained shortly.

Chainlink (LINK) is trading similarly to WGRT. It is the biggest gainer in our list. Its price has grown by almost 20% over the previous 24 hours. 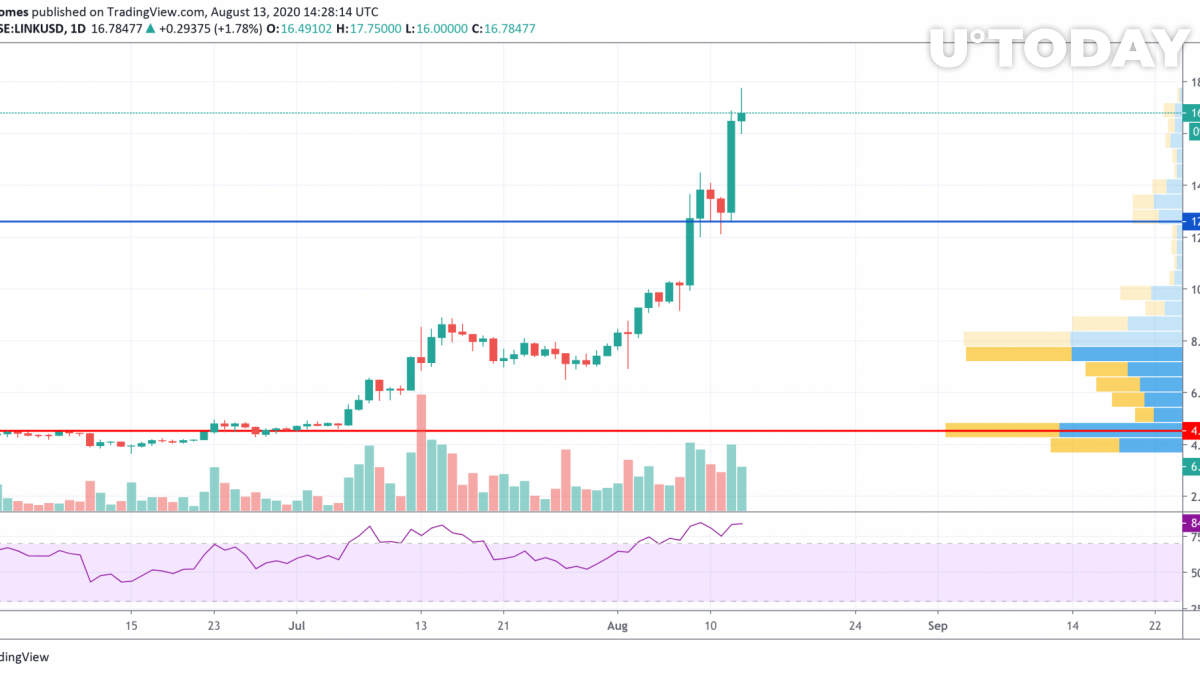 The long-term scenario is bullish, however, and a correction is needed to keep the rise going. That is why the short-term trend is likely to be bearish as the altcoin is overbought and the trading volume has slightly declined. Bulls may also show strength at the $12.60 mark.