Here’s yet another narrative we need to stop believing in, prominent analyst claims
Ex-Messari analyst and investor Qiao Wang explains why Q4 of 2020 finally brings one of the most resilient narratives surrounding the flagship cryptocurrency to an end. It looks like the common perception of Bitcoin’s (BTC) vulnerability to “exchange FUD” should be reconsidered.

Mr. Wang noted that, despite monstrous ‘black swan” events plaguing the cryptocurrencies segment, Bitcoin (BTC) bulls are not surrendering. Three major centralized platforms found themselves in hot water over a period of three weeks, but the influence of it was nowhere near that of Black Thursday. 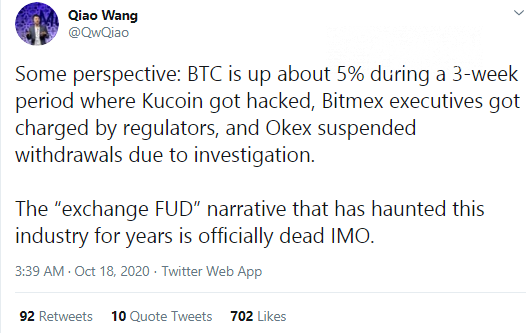 Image via Twitter“Exchange FUD,” or “fear-uncertainty-doubt” caused by the problems of centralized exchanges, failed to suppress Bitcoin’s (BTC) price upsurge in the short-term perspective.

That is why Mr. Wang claims that the industry should say farewell to this narrative as a reliable way of explaining the performance of Bitcoin (BTC). He admitted that the blockchain sector was haunted by this narrative “for years.”

Both regulators and hackers have been attacking trading platforms in the past three weeks. On Sept. 26, malefactors attacked the KuCoin regulated cryptocurrencies exchange. They used numerous tokens to launder their loot—mostly Chainlink (LINK), Compound Protocol (COMP) and Uniswap V2 governance token (UNI).

Then, on Oct. 1, the U.S. CFTC revealed that the BitMEX pioneering cryptocurrencies contracts exchange has been accused of money laundering and illegally offering derivatives products to U.S. citizens. To save BitMEX from regulatory scrutiny, CEO Arthur Hayes and CTO Samuel Reed stepped down from their positions.

Finally, OKEx exchange based in Malta halted withdrawals due to “collaboration” of one of its top officers with the Chinese police. Allegedly, the proceedings against OKEx may be related to the nation-wide campaign tasked with combatting money laundering in China.