A growing positive correlation between Bitcoin and stocks could spell trouble for the former, according to Vlad Antonov of Santiment, a data analysis service.

In a note published Wednesday, the researcher said that he expects Bitcoin to fall drastically should the stock market maintain its influence over it. He recalled recent cases wherein both Bitcoin and the S&P 500 rallied in sync against some of the most market-shaking events, including the recent successful COVID-19 vaccine trials and the US election. 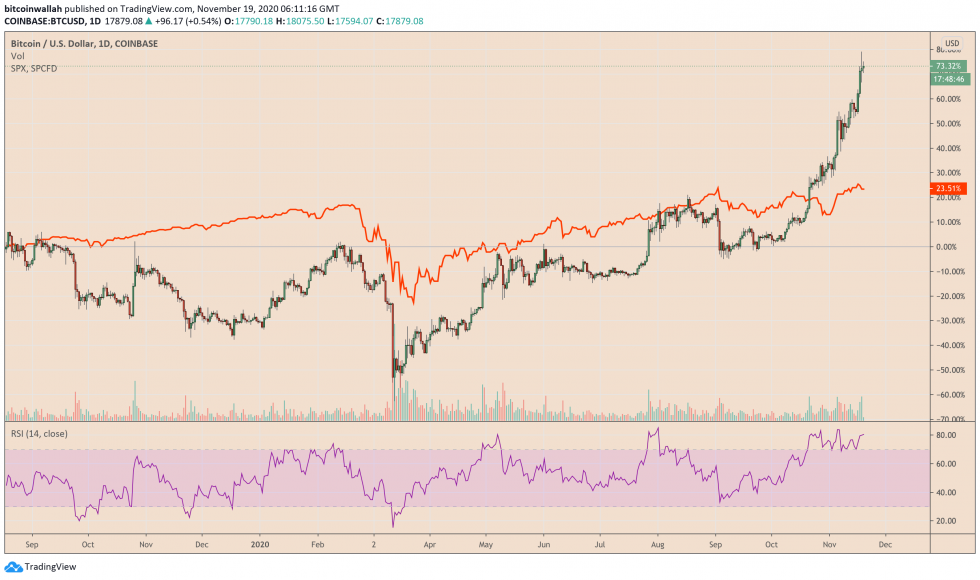 Just Bitcoin rallied too faster than its correlated peers, eking out 71.5 percent gains so far into the fourth quarter. The S&P 500, on the other hand, added only 7.32 percent in profits in the same period.

Mr. Antonov noted that euphoria for Bitcoin was decent across social media. Buying sentiment in the retail market surged after high-profile firms and individuals either bought the cryptocurrency or started providing its services to their existing clientele (read PayPal).

But one metric left the upside at risk of exhausting. Mr. Antonov said there is “an alarming divergence” between the Bitcoin price and its daily active addresses.

The graph above shows that DAA vs. Price Divergence remains in the bearish territory since October 2020. But ignoring that, the Bitcoin price is marching towards $20,000, its current record high. That is further increasing the divergence and strengthening the market’s bearish bias.

“If stocks will go through a correction in November-January, I anticipate that Bitcoin will have a 25%-35% correction,” Mr. Antonov wrote. “I conclude this from the lack of daily activity on the network and very bearish DAA vs Divergence.”

Mr. Antonov also compared the current social volume in the Bitcoin market compared to its previous rallies/pullbacks. He noted that the cryptocurrency is getting public attention, but it is still not as high as in March, May, and August. 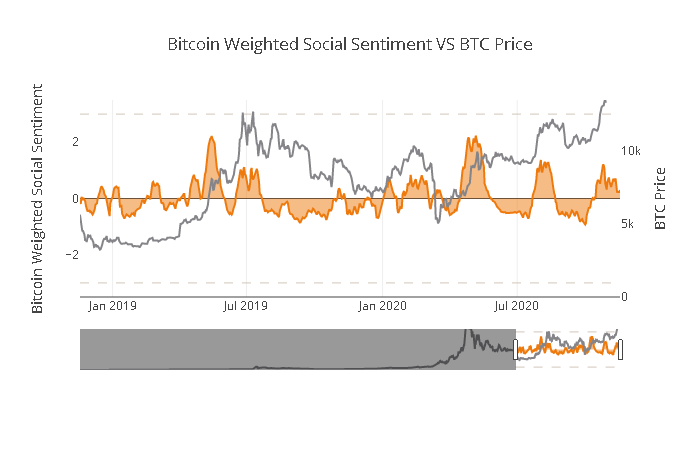 That, nevertheless, landed Bitcoin in a conflicted zone. The cryptocurrency rose towards $18,500 despite an underwhelming social volume. It also managed to hold onto its crucial support areas during downside corrections. Mr. Antonov said analysts could interpret it as a positive signal on the whole.

“When it comes to a weighted social sentiment, the overall trend bullish,” he added. “However, it significantly dropped compared to the beginning of the bull run that lifted BTC from 11k to 16k. It doesn’t look bullish enough to cause another 50-100% price growth in a short period.”