The launch of Secret Network promises to bring privacy coins features to the Ethereum mainnet, similar to those of Monero, Zcash, and Dash. In a post via its Twitter handler, Secret Network has announced its date of deployment on the Ethereum blockchain and has extended an invitation to the community:

Launching December 14th, the Secret Ethereum Bridge brings the power of programmable privacy to $ETH and ERC-20s at low cost. Learn how you can earn $SCRT via bridge mining, add bridge support for your favorite ERC-20s, and help us scale Secret #DeFi!

The Secret Network introduces “secret” smart contracts. These enable encrypted transactions and status that allow users to trade Secret Network-based tokens with “total privacy and low cost”. The launch on the Ethereum blockchain is part of a project called “Secret Ethereum Bridge” to expand the reach of the network:

Now we have turned our focus to global usage. To achieve this, we’re providing privacy to other blockchain ecosystems, including Ethereum, one of the most vibrant decentralized ecosystems of all.

The Secret Network team says that launching the bridge with Ethereum is a key step for privacy-conscious users. That way, they will be able to use decentralized applications with greater security, accessibility as “part of a global and open financial system”. Once the bridge is in place, users will be able to start earning rewards based on the Secret Networks SCRT token.

In conjunction, Secret Networks is preparing to launch an Automated Market Maker (AMM). Through it, users will be able to use a synthetic Secret token such as secretETH, secretSCRT, among others to provide liquidity and allow trading of tokens, Uniswap style. A date for the release of the WMA has not yet been announced, but it should be released after the Secret Ethereum Bridge. The Secret Network team also announced the following:

Our bridge operating partners include Figment, Staked, and B-Harvest – all of whom are extremely experienced node operators (each supporting dozens of networks) and key contributors to the Secret ecosystem.

How will the Secret Networks work on Ethereum?

The asset transfer enabled by the bridge between Secret Networks and Ethereum is bi-directional and, as mentioned, combines privacy coin features with the “programmability” of the ERC-20 standard. The Secret Networks team adds the following:

Bridge operators are responsible for watching the chain for new events. Once a new event is found, one of the bridge operators proposes a transaction, which is then confirmed by other operators. This triggers an on-chain event to mint secretETH on Secret Network or to unlock burned secretETH from the lock/deposit contact on Ethereum.

A user interface (UI) is currently being tested that can be used with the bridge to the Ethereum. Thus, people will be able to access wallet services such as Metamask or Keplr. The first wallet is compatible with the assets on Ethereum and the second allows to have tokens from Secrets Networks. Below you can see a preview of the UI. 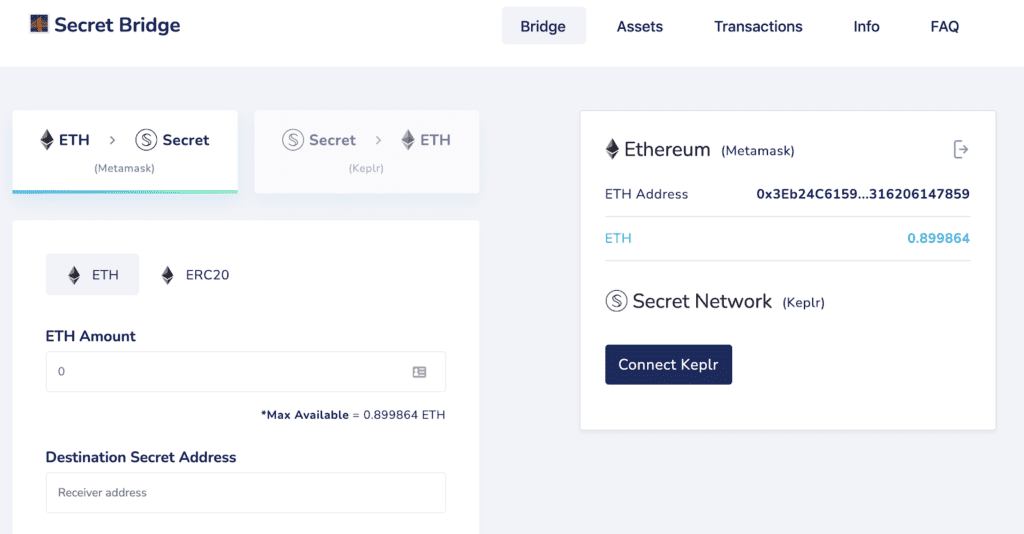