How much power is left for the prospective coins to grow until the end of 2020?

The cryptocurrency market has come back to the green zone as all Top 10 coins are again under the bullish influence. 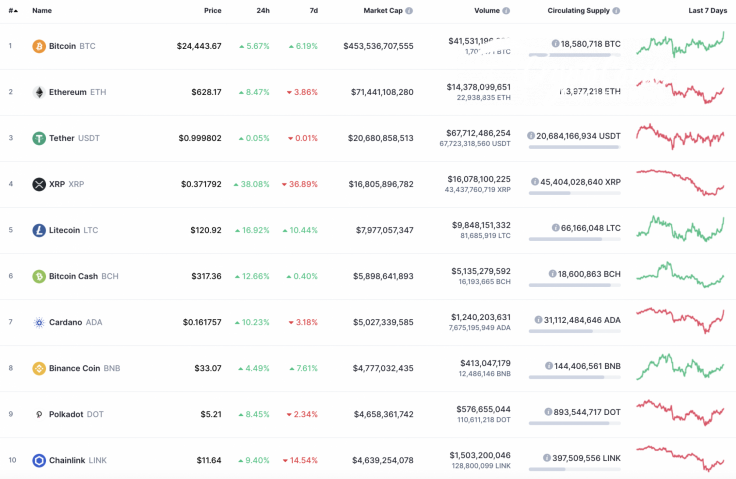 On the weekly chart, Bitcoin (BTC) has the potential to grow to the level at $26,500, according to the Fibonacci retracement. The ongoing rise is supported by the trading volume, which means that buyers are ready to push the rate of the chief crypto higher.

XRP is the main leader today but, just a few days ago, it was the top loser. The rate of the third most popular crypto has risen by 39% over the last day.

XRP/USD chart by TradingViewOn the daily time frame, XRP is looking bullish as bears could not seize the initiative after a drop to $0.21.

In this case, buyers are back in the game and are ready to recover the rate to $0.50 for one coin.

Litecoin (LTC) is the second fastest growing coin from our list. The rate of the “digital silver” has rocketed by almost 17% since yesterday.

Litecoin (LTC) is also looking bullish on the weekly time frame. It has growth potential to reach the resistance at $144, which is the peak of 2019. In addition, the trading volume is high enough, which means that the aforementioned level might be attained by the end of the year.

Bitcoin Cash (BCH) is not an exception to the rule as its rate has also significantly increased over the last day.

From the technical point of view, Bitcoin Cash (BCH) has no bearish signals in the long-term case. The buying trading volume is high and the next target is around $370.

Cardano (ADA) has shown less growth compared to other coins from the list. Its rate has gone up by 10%.

On the daily time frame, Cardano (ADA) made a false breakout of the $0.14 mark. Most of the liquidity is focused around $0.17, which the altcoin may reach shortly. Such a scenario is valid until the end of the current year.