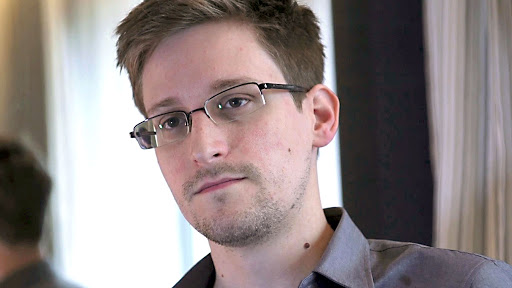 Former U.S. spy agency contractor Edward Snowden is interviewed by The Guardian in his hotel room in Hong Kong...Former U.S. spy agency contractor Edward Snowden is seen in this still image taken from video during an interview by The Guardian in his hotel room in Hong Kong June 6, 2013. Snowden was on July 24, 2013 granted documents that will allow him to leave a Moscow airport where he is holed up, an airport source said on Wednesday. The official, who spoke on condition of anonymity, said Snowden, who is wanted by the United States for leaking details of U.S. government intelligence programmes, was expected to meet his lawyer at Sheremetyevo airport later on Wednesday after lodging a request for temporary asylum in Russia. The immigration authorities declined immediate comment. Picture taken June 6, 2013. MANDATORY CREDIT. REUTERS/Glenn Greenwald/Laura Poitras/Courtesy of The Guardian/Handout via Reuters (CHINA - Tags: POLITICS MEDIA) ATTENTION EDITORS - THIS IMAGE WAS PROVIDED BY A THIRD PARTY. FOR EDITORIAL USE ONLY. NOT FOR SALE FOR MARKETING OR ADVERTISING CAMPAIGNS. NO SALES. NO ARCHIVES. THIS PICTURE IS DISTRIBUTED EXACTLY AS RECEIVED BY REUTERS, AS A SERVICE TO CLIENTS. NO THIRD PARTY SALES. NOT FOR USE BY REUTERS THIRD PARTY DISTRIBUTORS. MANDATORY CREDIT

Former Central Intelligence Agency employee and famed whistleblower Edward Snowden is discussing the future of digital currencies and the improvements he would like to see made in the Bitcoin infrastructure.

“I think it’s [cryptocurrency] inevitable. I think we’ve already seen states recognize that digital currencies will be the next stage of money because they’re trying to create competitors now effectively to Bitcoin…

So-called central bank digital currencies, which is just a rebranded version of fiat currencies which don’t have any really desirable properties for the public at large beyond the government being able to more effectively disburse stimulus payments.

But that unfortunately means, and I think a lot of people don’t have the financial sophistication to realize, that actually means they are simply taxing you in a new way because that stimulus payment is debasing the value of the currency at large.

Snowden points out that although Bitcoin can be a remedy for inflationary money printing practices, the network still has not overcome Bitcoin’s privacy and throughput issues.

“As you say the problem with everybody moving to digital currencies is we know the Bitcoin network doesn’t support throughput. Unfortunately, the Bitcoin network as it exists does not provide the privacy protections really necessary for these kinds of transactions at scale.

And I think it should and it could and it’s clear to me the developers realized this should be done but for whatever reason… They haven’t actually moved to do this which is puzzling to me because now they’ve had years to do it.”

Snowden admits that, despite Bitcoin’s flaws, he uses the cryptocurrency and still prefers it over traditional credit cards.

“When we talk about this, the inevitably of this transformation towards digital currency, I’m not picking winners and losers. I don’t have a horse or a care or a concern as to who wins this beyond I think what the world needs is a truly independent means of enabling private transaction.

If that’s Bitcoin, great, fabulous. I’ve used Bitcoin before I’ll continue to use Bitcoin. But it’s very difficult for me to use Bitcoin and yet that is a huge improvement over credit cards which I cannot use because those networks are not even pseudonymous in the way a Bitcoin transaction would be.

This is to say that cryptocurrency at this point has… pretty well-understood flaws. I don’t think there’s any reason to say they can’t be resolved. If we’re talking off-chain transactions, cross-chain transactions you know there are a lot of groups working on this. My big question is why are you guys taking so long.”