As Ripple prepares to fight a legal battle with US Securities and Exchange Commission, some cryptocurrency exchanges have delisted the XRP token.

Midway through December Ripple CEO Brad Garlinghouse announced that the company had been informed by the SEC that it would institute legal proceedings for what it deems to be an ongoing unregistered securities offering in relation to XRP tokens.

Just a few days later the SEC released its initial suit against Ripple, Garlinghouse and co-founder and executive chairman of the board Christian Larsen for allegedly conducting the unregistered offering from 2013 onwards.

The basis of the allegations

The SEC filing is focused on the alleged failure of the company, Garlinghouse and Larsen to register a securities offering which did not afford investors the necessary documents and information about Ripple and XRP.

The SEC stressed the fact that companies that were looking to take advantage of the benefit of a public offering have to comply with federal securities laws unless they have the necessary exemptions. The regulatory body believes that the accused had not met their obligations in this regard.

“We allege that Ripple, Larsen, and Garlinghouse failed to register their ongoing offer and sale of billions of XRP to retail investors, which deprived potential purchasers of adequate disclosures about XRP and Ripple’s business and other important long-standing protections that are fundamental to our robust public market system,” said Stephanie Avakian, Director of the SEC’s Enforcement Division.

The SEC filed its complaint in the federal district court in Manhattan and the charges include violation of registration provisions of the Securities Act of 1933. The SEC is looking for injunctive relief, disgorgement with prejudgment interest, and civil penalties.

As reported by The Daily Chain last week, Garlinghouse had already indicated that Ripple would be fighting the SEC’s filing and allegations in court. The CEO also shared a note he’d sent to employees regarding the ongoing situation – listing a number of key arguments that will be used to challenge the SEC’s suit and allegations that XRP is a security offering.

Some exchanges have delisted XRP over Christmas

While this is just the beginning of Ripple’s fight with the SEC, there have already been knock-on effects for XRP and its users and traders.

Major US cryptocurrency exchange Bitstamp announced that it would be suspending trading of XRP for its American customers from January 8 onwards, although users would still be able to withdraw their XRP holdings after that date. According to a report from Finance Magnates, Galaxy Digital has stopped making markets for XRP and cryptocurrency market maker B2C2 has halted trading of XRP.

As Coindesk reported on December 23, cryptocurrency money management firm Bitwise sold its holdings of XRP, worth around $9.3mln, in its crypto index fund.

The entire situation has seriously affected the price of XRP which dropped in value by around 50 percent following initial reports of the SEC lawsuit. 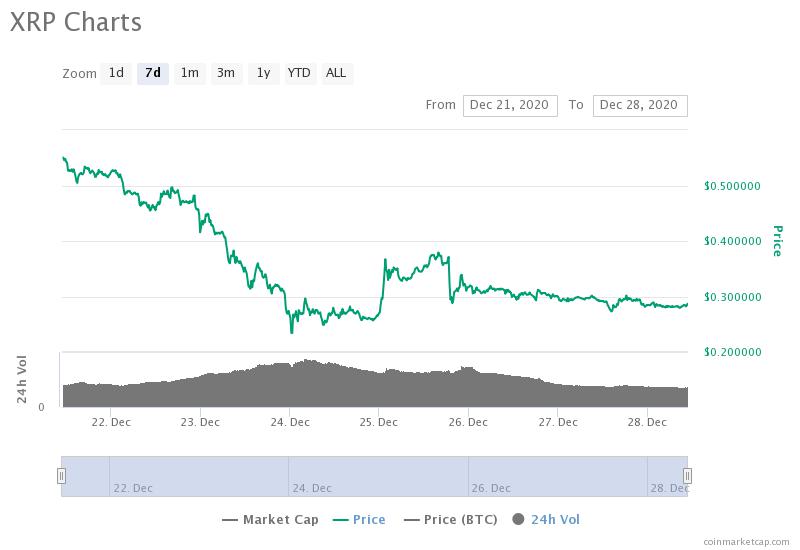