Bitcoin has been leading the entire market to see mixed price action. While altcoins have thrived during Bitcoin’s period of sideways trading, BTC has been largely unable to gain any clear trend.

One factor to consider is the speed at which it has been rejected during each attempted rally. Even the “Elon Musk pump” could not shift its trend and push it past its key resistance.

This has led one trader to expect imminent downside, specifically pointing to the lower-$20,000 region as a target.

BITCOIN STRUGGLES TO GAIN MOMENTUM AS SELLERS TAKE THE WHEEL

At the time of writing, Bitcoin is trading down over 4% at its current price of $32,800, which marks a massive decline from its overnight highs of $34,200 set just a few hours ago.

The crypto has erased just about every pump seen throughout the past few weeks, which is a grim sign for bears.

Until it breaks a descending resistance line that it has formed, it may continue drifting lower.

While sharing his thoughts on Bitcoin’s current technical outlook, one analyst explained that he is watching for further near-term downside.

Specifically, he points to the lower-$20,000 region as an area where he has interest in buying.

“Why is CT overly bullish? I don’t get it, and i won’t until i see $36k cleared. Show me your bullish charts, if any.” 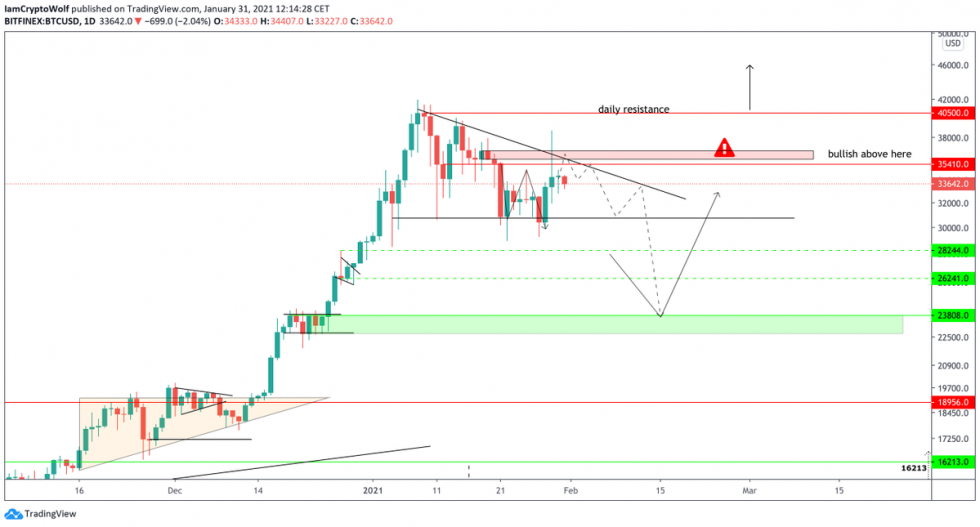 The coming few days should shed some light on Bitcoin’s outlook and whether or not this recent weakness is emblematic of a pending drop to new local lows.