World’s richest man and Tesla CEO Elon Musk made waves recently by announcing his company’s purchase of $1.5 billion worth of Bitcoin, an announcement that generated renewed interest in cryptocurrency and sent the market price higher. This also led to speculation as to which major company would make a significant cryptocurrency investment next.

Dash, however, has the option of not only being owned by companies but of owning companies as well. The Dash Investment Foundation (DIF) is a first-of-its-kind entity fully controlled by the Dash decentralized autonomous organization (DAO) which allows the network itself to legally own property, including equity in companies. In this way, the Dash network itself could own shares in Tesla and other companies.

According to a recent poll by Dash Communications Manager Mark Mason surveying the Dash community on which investments they would like to see next from the DIF, the top choice was shares in the Coinbase company from their upcoming IPO at 32.1%, with the acquisition of Tesla shares coming in at 25.1%. Additionally, 28.2% believed that the DIF should invest in both. The DIF’s present portfolio includes equity in trading platform Quadency, gaming platform Ready Raider, retail and payments apps CrayPay, is currently in the process of accepting shares from Dash Retail, and has soon-to-be-announced financial services platforms. 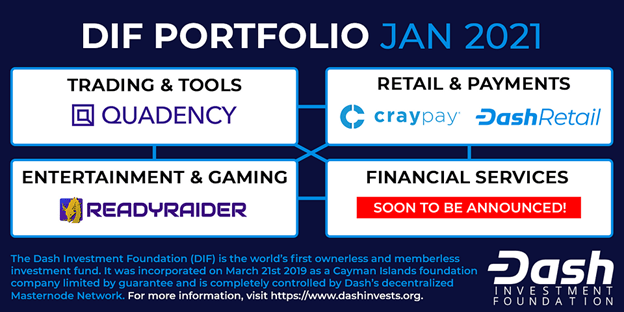 Ryan Taylor, CEO of Dash Core Group and DIF Supervisor recently commented on a live AMA that: “What the charter of the Dash Investment Foundation says is that it will invest for the benefit of the network. Now that does technically allow the DIF to invest in stocks, bonds, or whatever it wants. I think the real secret sauce where it really shines is in bringing partners to the table.”

The DIF is the world’s first ownerless and memberless investment fund. It was incorporated on March 21st, 2019 as a Cayman Islands foundation company limited by guarantee and is completely controlled by Dash’s decentralized Masternode Network. Dash Investment Foundation is tasked with strengthening the Dash network through investment operations. By this, the foundation creates a bridge between the network protocol and the legacy financial and legal systems. This opens new possibilities for entrepreneurs and the Dash network to partner and mutually benefit from the funding available through the Dash network via Dash Investment Foundation.

“The cryptospace hasn’t realized just yet how revolutionary the DIF is. It’s one of blockchain’s best kept secrets. While the media is currently fixated on tech companies buying Bitcoin. The Dash network is investing and taking equity in blockchain start-ups and tech companies. The DIF portfolio is growing fast, partner interest is strong, the DIF is reviewing many company pitch-decks for investment and we have new DIF investments in the pipeline that we’re very excited to announce to the network. It’s a very exciting time for Dash!”

When asked to explain how the DIF was able to get the funding from the network to invest in tech companies and how Dash is different from Bitcoin, Mason said that while Bitcoin had the first-mover advantage as being the first Proof of Work cryptocurrency, Dash had the first-mover advantage of being the first Proof of Service cryptocurrency with a decentralized autonomous organization, that is self-funding and self-governing at the protocol layer. He added: