Uniswap price has been among a few DeFi coins that have seen impressive gains during the recent bull run. At the time of writing, UNI is pushing past another critical level, hinting at a 45% bull rally soon.

Uniswap price prepares for a massive leg up

Uniswap price surged approximately 70% on February 20 and hit a local top at $33.23. Since then, the DeFi coin has been consolidating, forming lower highs and higher lows. By connecting these swing highs and swing lows using trendlines, a symmetrical triangle pattern forms. The target for this technical formation is determined by measuring the distance between pivot high and pivot low and adding it to the breakout point. The direction of a breakout for this setup isn’t set in stone and could go either way.

In this case, Uniswap price is breaching the triangle’s upper trendline at $23, which indicates a bullish breakout. Therefore, a 47% upswing puts UNI’s target at $33.6. 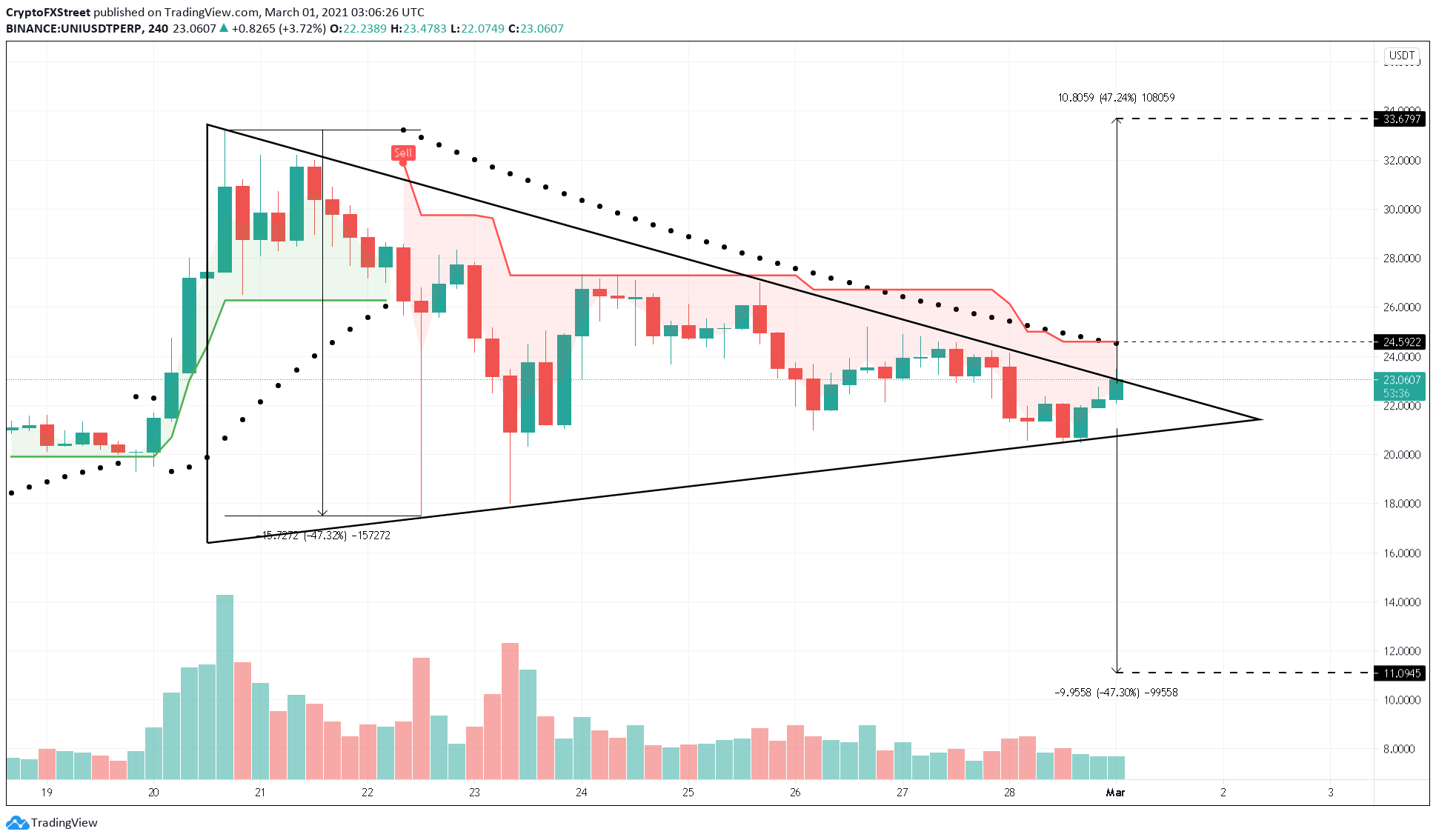 Supporting the bullish thesis is IntotheBlock’s In/Out of the Money Around Price (IOMAP) model, which shows a stable support barrier at $21.30. Here roughly 8,200 addresses hold nearly 16.3 million UNI. IOMAP cohorts also reveal a cluster of “Out of the Money” buyers present from $23.41 to $25.05, where 5,000 addresses hold roughly 25 million UNI. Hence, a four-hour candlestick close above this level will confirm an upswing and propel Uniswap price to $33.6.

On the flip side, Uniswap price could suffer a fatal setback if it fails to climb above $25.05. Adding credence to this bearish outlook is the sell signal from the SuperTrend and the Parabolic indicator that spans back to February 22.

So, a rejection leading to a four-hour candlestick close below $20.74 will invalidate the bullish thesis and result in a downswing to $11. Uniswap price analysis is bullish today as a higher low has been established above $27 after a several-day consolidation. Therefore, we expect UNI/USD to move higher over the next 24 hours and likely test the $27 mark.

The overall market traded mostly with bullish momentum over the last 24 hours. The market leader, Bitcoin, gained 2.91 percent, while Ethereum gained 2.05 percent. Meanwhile, Terra (LUNA) is among the top performers, with a gain of 7.5 percent.

Uniswap price movement in the last 24 hours: Uniswap continues to consolidate above $25

On the 4-hour chart, we can see bullish momentum slowly forming as Uniswap price targets the $27 mark next.

Uniswap price has struggled to reach further upside after a very strong advance at the end of September. During the first days of October, UNI/USD set another higher high at $27 after breaking the previous high at $26.

What followed was a several-day consolidation around the $25 mark. On the 11th of October, Uniswap finally broke lower, moving to the $22.5 mark. From there, a reversal was seen, pushing UNI/USD towards a new higher high at $28.

However, since then, a consolidation above $25 after a brief retracement has been seen. Overall, unless the Uniswap price action breaks below the $25 support, we expect further upside later this week.

Uniswap price analysis is bullish today as a higher low has been established around $25 after consolidation over the last 24 hours. Therefore, we expect UNI/USD to continue higher later today and test the $27 mark next.