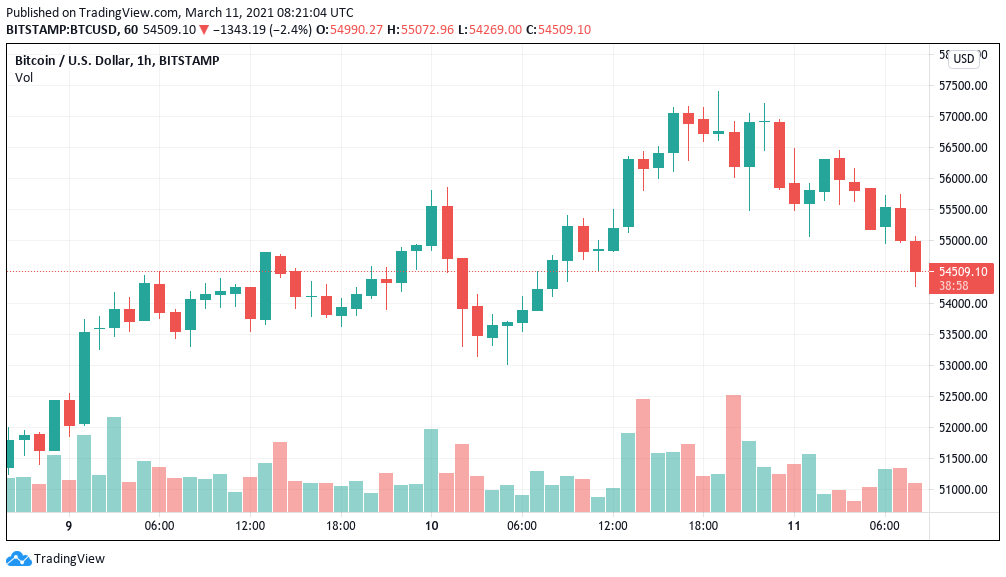 Data from Cointelegraph Markets and TradingView showed BTC/USD returning to $55,000 on Thursday after hitting local highs of around $57,00.

The previous day had delivered strong performance across cryptocurrency, with bulls eagerly awaiting a retest of Bitcoin’s all-time highs at $58,300.

While the momentum did much to overcome a final band of resistance in place just below that level, it did not last, as an alleged adoption announcement from Oracle failed to materialize.

Starting in February, claims began to surface that the firm planned to buy a huge amount of Bitcoin in a move that would rival top institutional investors Grayscale and MicroStrategy. Confirmation should have come on Wednesday, social media users added, but an earnings call failed to confirm their suspicions.

In the event, co-founder Larry Ellison did not disclose any Bitcoin-related activity, while signalling that he was bullish on the trading environment for the coming year.

“I’m not really ready to disclose our plans as to why I think it’s going to suddenly spike but we expect very, very rapid database growth next year,” he said, quoted by CNBC.

At the time of writing, BTC/USD was continuing to retrace, losing around 2% in an hour and heading towards $54,000.

“For those caught in the day to day pricing of Bitcoin, it is a long journey,” entrepreneur Jeff Booth responded:

“The fact that Oracle hasn’t bought ‘yet’ is very bullish and signalling how early it still is.”

Analyst: Amazon market cap could be next for Bitcoin

Taking a longer-term view, one analyst this week described the slowdown in Bitcoin’s bull run at around a $1 trillion market cap as a “back-and-fill process.”

In a tweet, Mike McGlone, senior commodity strategist at Bloomberg Intelligence, argued that once consolidation is over, Bitcoin would rise again — and its next target would be Amazon’s market cap.

“Tesla in Rear View, About $80,000 Bitcoin Eyes Amazon Market Cap — Once Bitcoin’s back-and-fill process around the $1 trillion market cap is complete, we see internet pioneer Amazon.com as a potential next threshold…,” he wrote on Tuesday. 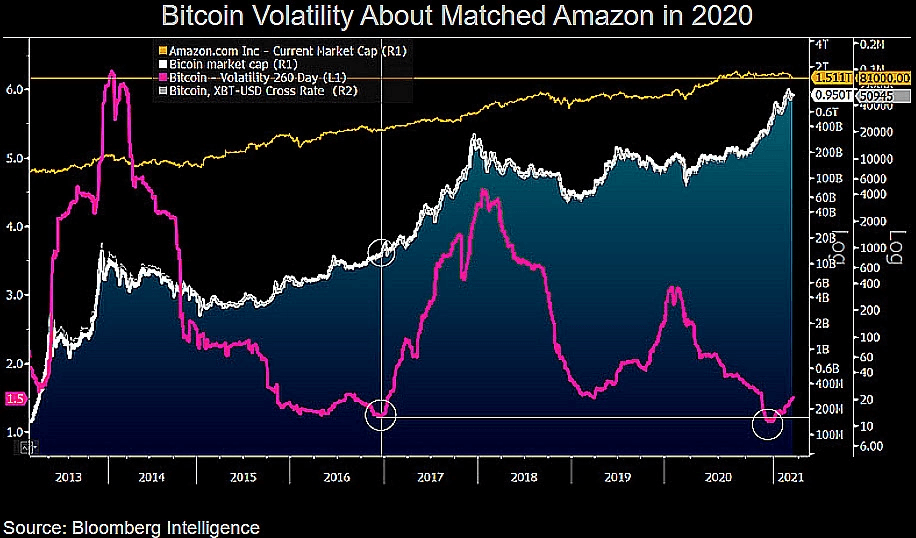 McGlone uploaded a comparative chart highlighting Bitcoin’s low volatility poised to repeat performance from 2017, the year in which BTC/USD grew from $1,000 to just under $20,000. Bitcoin (BTC) briefly dipped below $63,000 later on Oct. 21 as a standard correction cooled the market.

Data from Cointelegraph Markets Pro and TradingView followed BTC/USD as it came off all-time highs above $67,000 to hit lows of $62,860 on Bitstamp.

The roughly 6% drop from its peak came as little surprise to seasoned traders, despite Bitcoin so far failing to create solid support at the site of its previous all-time high of $64,900.

“Bitcoin is still undergoing this retest attempt,” popular trader Rekt Capital wrote in his latest update, suggesting that the old high could still flip to support.

Others took the chance to poke fun at the jittery mood on social media, where various users were getting cold feet observing the retracement.

It's just a joke.

Most of you will get liquidated on a 5% drop anyway so it won't matter what happens after that.— NebraskanGooner📈📈 (@nebraskangooner) October 21, 2021

The return to near $60,000, now the top of a large buy wall, meanwhile served to flush out excessive optimism on derivatives markets.

As Cointelegraph reported, funding rates had skyrocketed overnight, but were slowly returning to more sustainable levels at the time of writing.

Altcoins presented a mixed but altogether more positive picture on the day.

After losing out broadly against BTC, major altcoins were spared a comedown of their own, with Ether (ETH) still above $4,000. Solana (SOL) gained over 25% in the past two days.

Only Binance Coin (BNB) saw any noticeable downwards movement, trading 4% lower over the past 24 hours.

“Total altcoin market cap close to taking out its September high (and ATH). Did not do that in 2017 until mid-Nov,” renowned analyst TechDev noted about the altcoin situation on Wednesday.

“Could signal some serious alt runs sooner than expected. Will keep close eye. Ethereum ain’t playin around this cycle.”