The ether price, already up a dizzying five-fold this year, extended its early Monday, pushing past the psychological milestone of $4,000 for the first time.

Ether, the native cryptocurrency of the Ethereum blockchain and the second-biggest overall, went as high as $4,070 shortly after 3:00 coordinated universal time (11 p.m. Sunday ET), according to CoinDesk 20 data.

The year-to-date return is now around 435%, versus about 104% for bitcoin, the largest cryptocurrency. 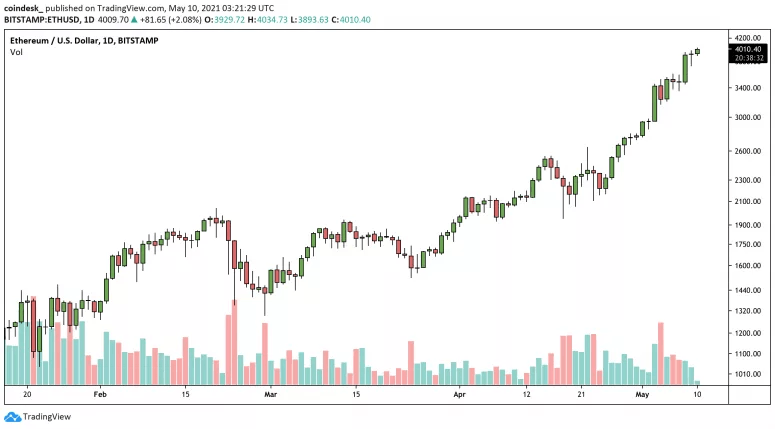 The ether price has extended this year’s astonishing run.

This year’s gains have been powered by speculation from new market entrants betting on so-called decentralized finance, or DeFi, which consists of blockchain-based trading and lending platforms that aim to automate many functions of banks and other traditional financial firms. The Ethereum blockchain serves as the foundation for much of DeFi, and it also is the basis for many non-fungible tokens, or NFTs, another hot trend in cryptocurrency markets.

Of course, it’s no joke that cryptocurrencies can be extremely volatile in price, prompting warnings that investors should exercise caution.

Some investors are apparently paying up for ether, to the extent that a premium has appeared on the U.S.-based Coinbase exchange over prices quoted on other major exchanges, according to Ki Young Ju, CEO of crypto data firm CryptoQuant.

Ju told CoinDesk via Telegram that the premium was “significant” as ether climbed a staggering 72% over the two-week period from April 26.

The market for ether has become so ebullient that crypto derivatives exchange Deribit just listed an options contract expiring in March 2022 with a strike price of $50,000. The level is so far above the current price that the exchange later tweeted that there was “nothing frothy about us listing this strike” and that the decision fell within its “strict listing policy.”

Additional excitement has come from the Ethereum blockchain’s plan to shift toward a “proof-of-stake” consensus mechanism – how transactions across the network are confirmed – that theoretically will be less energy-hungry and more scalable than the current “proof-of-work” system, which is similar to what the Bitcoin blockchain uses.