Bitcoin has bounced off after the latest negative engagement by Elon Musk and has neared $38,000. Most alternative coins have spiked even harder in the past 24 hours, with ETH trading around $2,800 and BNB surging well past $400.

After the previous weekend in which BTC dumped below $34,000, the asset performed rather well during the workweek. It was gradually increasing for a few consecutive days and even broke above $37,000.

The bulls drove it to a six-day high of roughly $39,500, but, as it happened numerous times in the past few weeks, it couldn’t go any higher. Just the opposite – bitcoin started retracing heavily after yet another controversial tweet by Tesla’s CEO.

Following a Linkin Park reference and a broken heart tweeted by Musk, the cryptocurrency dumped by $4,000 to a daily low of $35,500.

However, the bulls stepped up again at this point and pushed it north. As of now, BTC trades just over $37,500, and its market capitalization has reclaimed $700 billion. 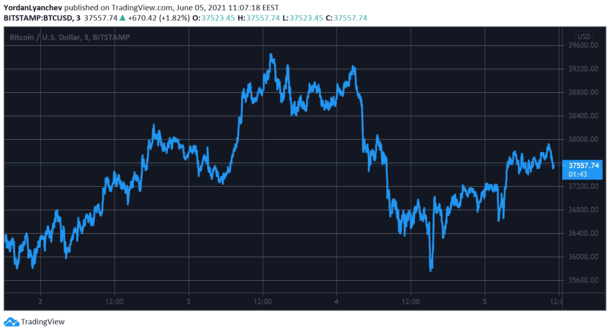 The altcoins suffered even more during yesterday’s market correction. Ethereum dropped well below $2,600, but it has bounced off quite impressively and currently stands around $2,800.

Binance Coin also fell hard and dropped beneath $370. However, BNB has spiked the most from the top ten in the past 24 hours after a 10% surge. As a result, the asset has reclaimed $400 and now sits at $420.

Theta Fuel and Curve DAO Token are the most impressive gainers on a 24-hour scale. Both assets have spiked by 25% to $0.5 and $2.75, respectively.

Ultimately, the crypto market cap has recovered a little over $80 billion since yesterday and sits above $1.7 trillion.