SafeMoon price craves new opportunity, but SAFEMOON rally not on the horizon SafeMoon price fails to build on the golden cross signal on June 16 as the weight of the deteriorating cryptocurrency complex plunged SAFEMOON to a new correction low. The initial recovery was impulsive, but the digital token has shifted into a consolidation with no discernible clues about the direction or magnitude of the future trend. Thus, even though SafeMoon price craves a new opportunity, caution is warranted until a broader wave of strength strikes the altcoin segment of the market.

In a spirited attempt to induce a campaign to “pop off” SafeMoon price on June 21, Reddit user “GMEandAMCbroughtme” on r/SatoshiStreetBets, encouraged SAFEMOON followers to create a crypto version of Gamestop and AMC. Unfortunately, the “biggest squeeze of all time” did not materialize as the altcoin fell below the May 19 low the following day, losing 20% on the two-hour candlestick.

The initial turn higher brought forth by the SafeMoon price strength during June 13-15 was respected by the 200 two-hour SMA, lending credibility to a mildly bullish outlook for SAFEMOON. However, after the turn lower, the longer-term moving average combined with the 50 two-hour SMA at $0.00000371 now presents formidable resistance if the digital asset chooses to break free from the minor consolidation.

Nevertheless, as long as SafeMoon price remains above the May 25 declining trend line, investors can maintain their attention on a timely entry price from the long side. Based on the current price structure on the two-hour chart, the optimal point to initiate a long position would be a close above the 200 two-hour SMA at $0.00000408. Yes, it is approximately 20% from the current price, but it is a small cost to pay to achieve a higher probability opportunity in SAFEMOON. 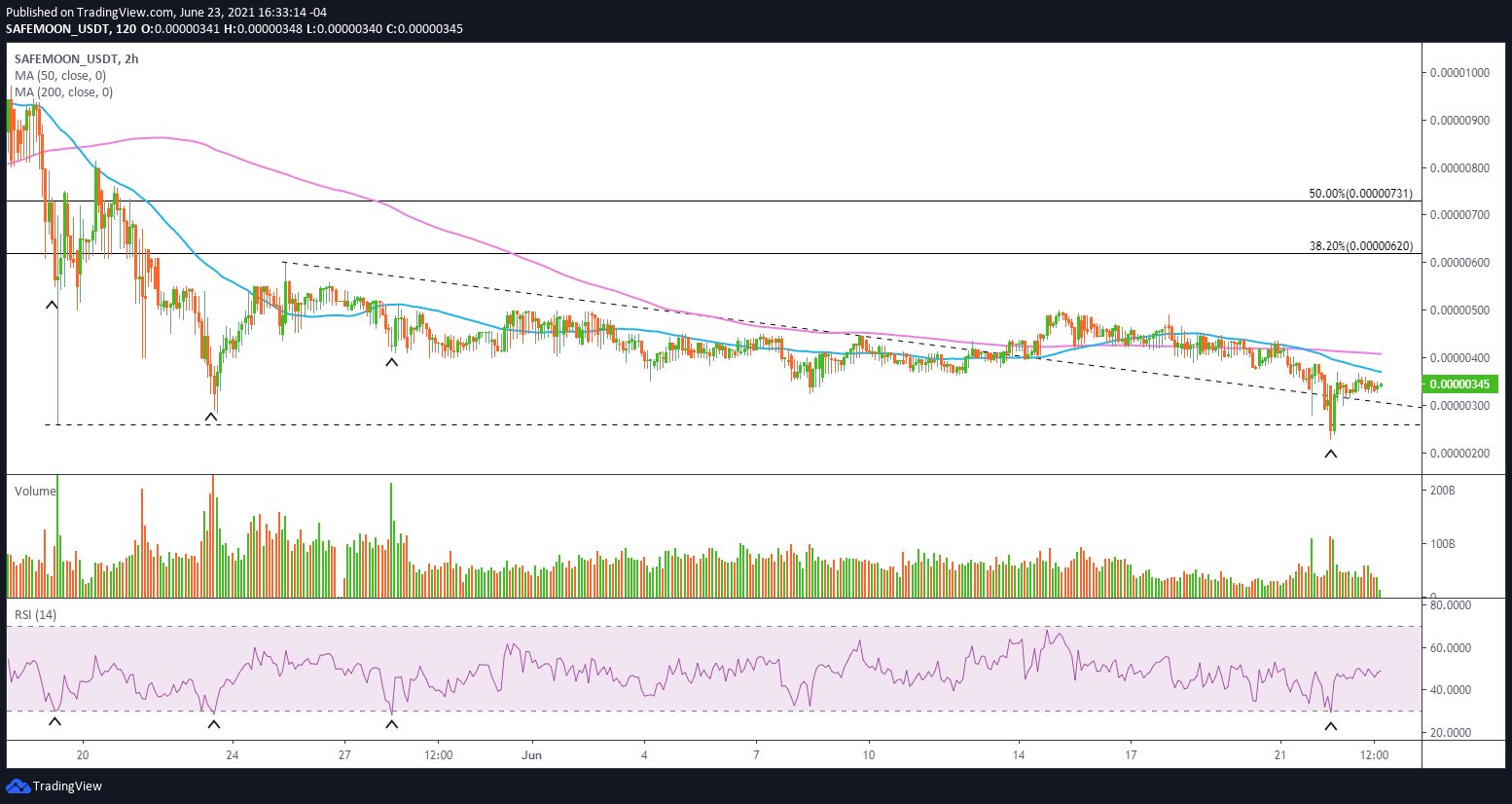 A close below the May 25 declining trend line, now at $0.00000308, will raise the potential of another test of the May 19 low of $0.00000261. It may come as a surprise in light of the oversold condition dictated by the two-hour RSI, but it should be noted that only one of the last three oversold readings resulted in a notable rebound for SAFEMOON. Thus, suggesting that a rally may not be on the horizon.

The worst-case scenario for SafeMoon price is an unstoppable plunge towards the April 21 low of $0.00000150, realizing a decline of over 50% from the current price.

At this moment, SafeMoon price appears to be in a lengthy bottoming process following the May correction, marked by stubborn moving average resistance, unremarkable levels of accumulation, and a general tendency to follow the cryptocurrency market trend. Therefore, when SAFEMOON can originate relative strength by exceeding outstanding resistance levels, market operators can feel more comfortable commencing trading operations in the rookie cryptocurrency.