Use Of Green Energy For Bitcoin Mining Increased 52.2% in 2021, Report The Bitcoin Mining Council, an organization created to promote the use of renewable energy in the Bitcoin mining industry, has released its first compendium on the state of the art of the mining industry.

The Bitcoin Mining Council’s findings look promising at first glance. The report explains that sustainable energy use increased 52.2% between Q1 and Q2 of 2021, with a 15% uplift in network efficiency measured in PH/MW.

Similarly, it was also revealed that its members reported that 67.6% of the total energy used to mine Bitcoin comes from sustainable sources, which ensures a much lower environmental impact than that of the industry in other countries, especially China, which concentrates most of the Bitcoin hashrate, with a large portion of miners using electricity generated by coal-fired plants.

Additional data shared in the report suggested that perhaps concerns about the environmental impact of Bitcoin mining are being decontextualized or overestimated. For example, the network’s energy consumption represents 0.007% of the world’s total. Also, 56% of total global Bitcoin mining is based on sustainable energy.

Is The Report Backed By The Scientific Method?

The Bitcoin Mining Council started as a response to Elon Musk’s alleged concerns about the environmental impact of Bitcoin mining. When Elon Musk shared on Twitter the announcement that Tesla would stop accepting Bitcoin as payment due to its environmental issues, Bitcoin embarked into a slump that marked the beginning of the end for the bullish trend it had maintained since the crash caused by the Coronavirus outbreak a year ago.

The approach taken by the researchers is, erm, tricky to comprehend… to say the least. The data on sustainable energy use and increased efficiency was compiled using a three-question survey and documental research using internet sources.

The sample size is unknown, and so is the margin of error.

Another point to consider is the point made by Larry Cermak, Director of Research at The Block. Cermak explains that there is currently a migration of miners who are trying to settle in other regions following China’s crackdown on the industry. 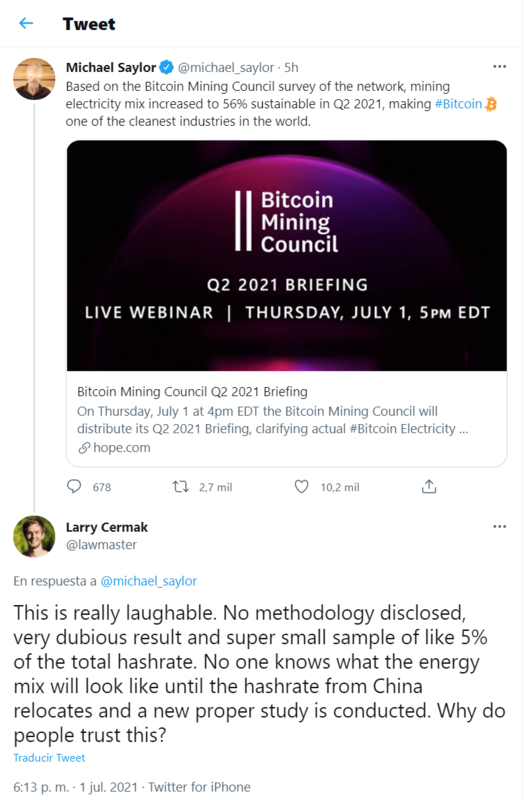 Some countries are trying to attract large miners with promises of low costs and the use of renewable energy. Miami is touting its reliance on nuclear power. Paraguay is trying to woo miners with its cheap hydroelectric power. Even El Salvador is exploring the use of volcanoes as a source of energy.

However, there are already reports that large-scale Chinese miners are looking to move to nearby countries.

Long before the Tesla speculation and the Chinese offensive, there were reports of miners migrating to Iran. Today Kazakhstan looks like a destination under consideration for large miners.

But there is a latent danger. Experts are already warning that large miners could migrate to other countries and maintain their dependence on polluting energies. This would simply “export” the pollution without really changing the fundamentals.

And that would be bad news for many speculators who are counting on a change of heart from Musk should it come to light that BTC uses more than 50% renewable energy – across the entire network, not just among members of the Bitcoin Mining Council.