Ethereum has been showing a much stronger performance than Bitcoin lately, with the second largest cryptocurrency continuing to rise above $ 2,300 yesterday. So, rightly so, traders are wondering if now is the right time to buy Ethereum.

At the time of writing, ETH is indeed up 3.35% over 34 hours, while Bitcoin is gaining less than 1%. The difference is even more striking over a week, with Ethereum advancing 6.55%, while BTC losing nearly 5%.

In this context, investors must therefore ask themselves what has given Ethereum the advantage in recent days.

The main answer lies in the prospect of updating the Ethereum network, in reality a hard fork which has been named “London”.

Indeed, we learned yesterday that this update will probably be released on August 4, on the occasion of block 12,965,000.

Remember that this hard fork is part of the Ethereum 2.0 roadmap, which will replace Ethereum’s current proof of work protocol with proof of stake, and that it has already been implemented in various test networks. Following its successful activation on the Ropsten and Goerli testnets, the final release date of the hard fork has therefore been decided.

Note that among the improvements made by this update, we find a new fee structure to make Ethereum less inflationary by burning part of the fees and therefore reducing Ethereum mining income, which did not fail to arouse Controversy.

Another London improvement plans to delay the “Ethereum Difficulty Bomb” until December 1. This mechanism will gradually increase the difficulty of Ethereum mining, effectively “freezing” proof of work in preparation for Ethereum’s move to proof of stake.

From a technical standpoint, we can see from the hourly chart below that ETH / USD is benefiting from the support of an uptrend line visible since last Friday. 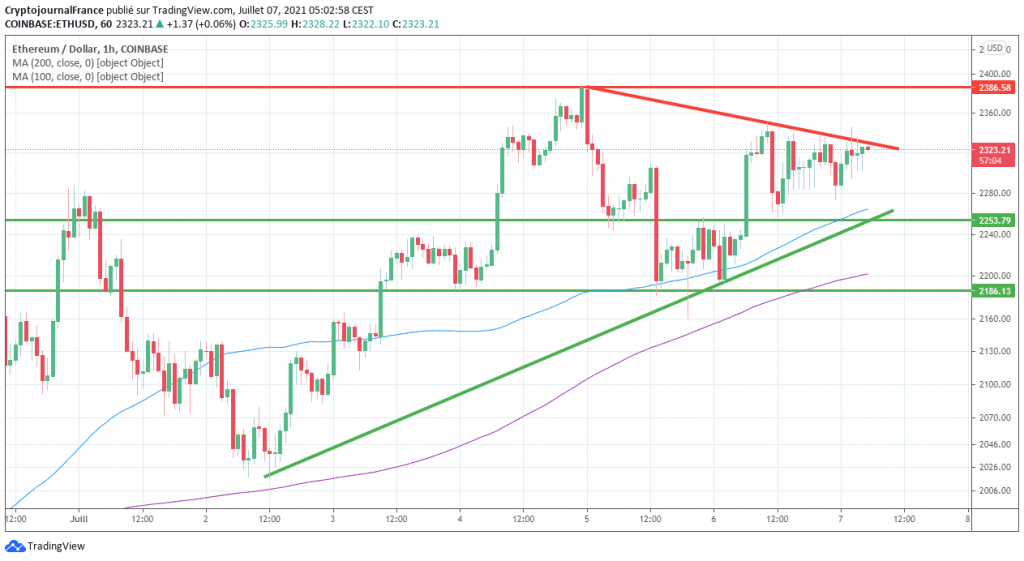 On the other hand, Ethereum’s rise is blocked by a downtrend line visible from Monday’s peak at $ 2390.

For the situation to clear up in the short term, therefore, Ethereum would have to break either of that line. On the upside, this implies a return above $ 2350, while on the downside, a return below $ 2250 would be required.

Note that the study of the 100 and 200 hour moving averages, both trending upward and located below the Ethereum price, tilts the scales in the bullish scenario.

Moreover, a pullback on the Ethereum daily chart confirms the bullish outlook, as can be seen below. 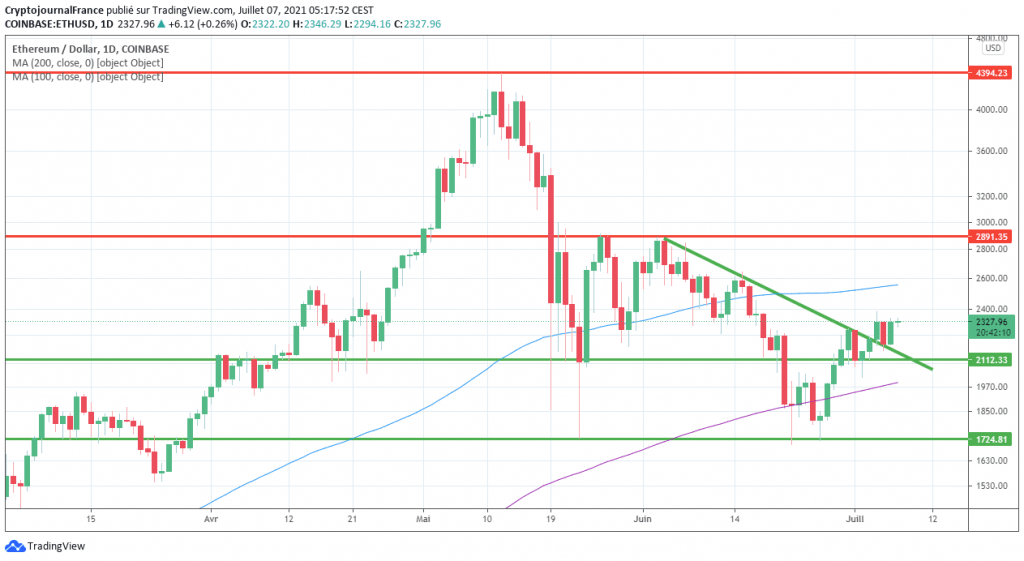 Indeed, we can see that ETH / USD has broken above a downtrend line that has been visible since early June, which is a bullish signal.

Finally, regarding the important thresholds to watch on Ethereum, note that the area formed by the threshold of $ 2,500 and the 100-day moving average currently at $ 2,555 is the first important target, before a chart resistance at $ 2,875. Beyond that, the psychological threshold of $ 3,000 could quickly be reached. This represents upside potential of nearly 30% compared to current prices.

On the downside, a break in ETH below the $ 2,000 level would call into question the near-term bullish outlook.