VeChain price has a problem, as VET bears build momentum for a brutal capitulation VeChain price constructed a bear flag pattern following the June 22 low, taking the cryptocurrency to the resistance outlined by the 200-day SMA and the Anchored VWAP from January 3. Under the weight of the sturdy resistance, VET broke out from the pattern on July 5 and is registering a convincing follow-through today. Under the current price structure, VeChain price is projected to test at least the May 23 low or June 22 low and potentially fall 60% from the pattern breakout.

VeChain price logged a 4% gain in 2Q, despite plummeting 85% at the May 19 low, creating an interesting story in the cryptocurrency complex. Nonetheless, VET has been undermined by distribution since the May 19 low and recently has failed to acknowledge the support granted by the 200-day SMA at $0.091 and the Anchored VWAP from January 3 at $0.088, rather finding them to be resistance.

From the June 22 low of $0.059 until July 4, VeChain price rebounded but plotted a corrective structure propped up by a volume profile that did not achieve above-average volume levels on positive days. The result was a VET breakout from a bear flag pattern on July 5, with a 5% drop and confirmed today with a 7% fall at the time of writing.

A more realistic outcome for the VET bear flag resolution is a test of the June 22 low of $0.059, representing a loss of approximately 20% from the current price. If selling quickens beyond that level, VeChain price may be tempted to test the May 19 low of $0.042, but that would only occur if the cryptocurrency complex suffers a major wave of selling pressure.

Should VeChain price press below the June 22 low, a bullish momentum divergence on the daily Relative Strength Index (RSI) is something to watch for. It would acknowledge exhaustion of selling pressure. 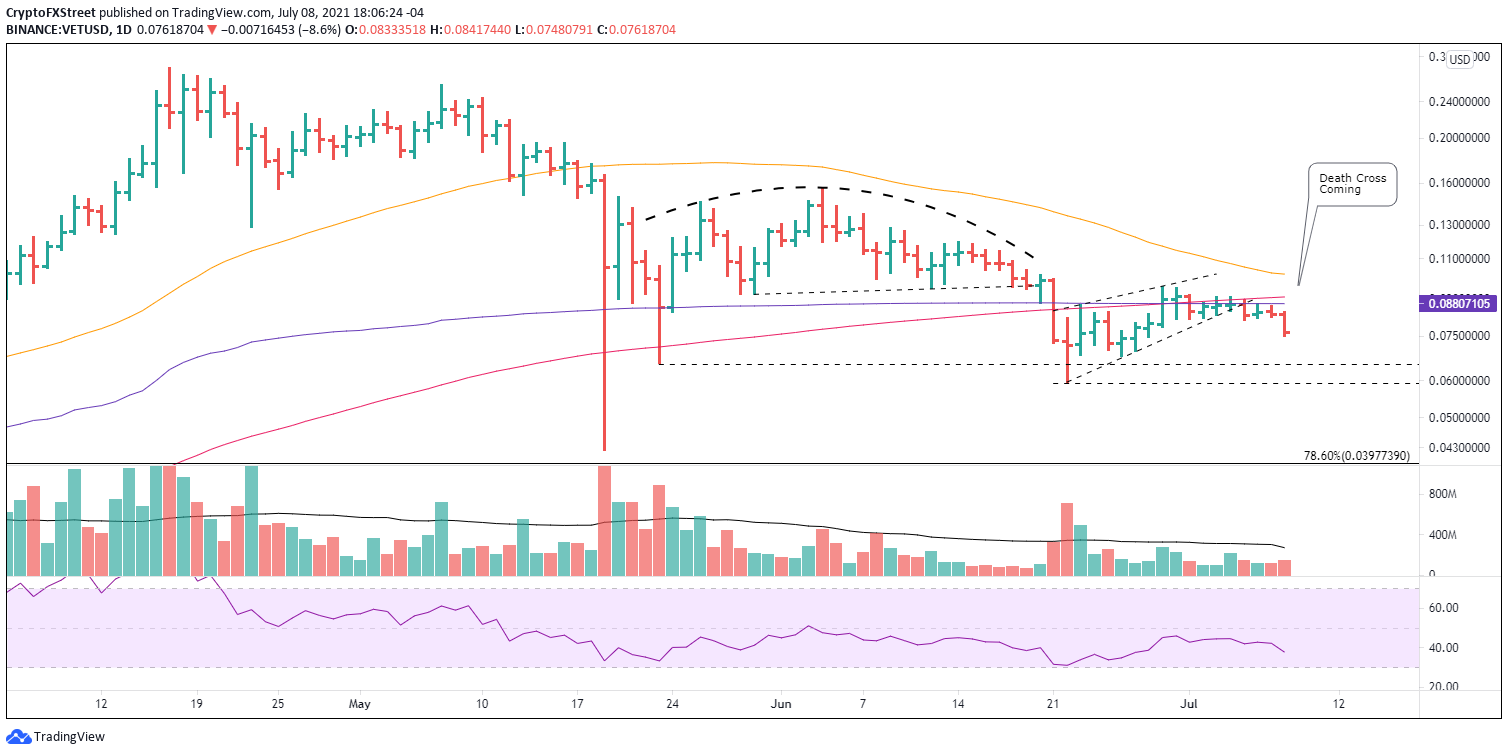 To break with the bearish narrative, VeChain price needs a daily close above the Anchored VWAP at $0.088 and the 200-day SMA at $0.091. However, VET would be quickly confronted by the declining 50-day SMA at $0.101, which is on pace to cross below the 200-day SMA in less than a week, triggering a bearish Death Cross pattern.

VeChain price momentum is clearly to the downside after today’s decline of 7%. Bears have asserted control over the digital asset, and if the thrust lower gains further momentum, VET may be facing a brutal 55% decline from the current price.

Something to keep in mind is that VET fell approximately 40% from June 21 to June 22.