Shiba Inu price has been consolidating like most of the altcoins but has provided healthy moves to capitalize on. SHIB is currently trading above two significant support barriers that could have triggered massive rallies in the past.

Shiba Inu was among the plethora of dog coins that spawned during the recent bull run. These coins siphoned popularity from the old meme coin – Dogecoin – but SHIB was the one that made it out alive after the massive crash on May 19.

While piggybacking off the hype around meme coins got it through the door, celebrity endorsements pushed Shiba Inu toe to toe with Dogecoin, at least in terms of retail interest.

I’m about to buy some shiba inu coins 💎

Elon Musk’s mentions of Shiba Inu helped the coin, but unlike other dog-themed cryptocurrencies, this meme coin had plans, a hard cap on its supply, which made it stand out from the rest.

This concoction led Shiba Inu to be listed on Coinbase, a major achievement for the altcoin.

Another significant milestone was the launch of the ShibaSwap decentralized exchange (DEX), launched on July 6. Interestingly, the exchange saw $1 billion in total value locked (TVL) on the first day of its launch and hit $1.5 billion the next day.

Unlike most DEXs, ShibaSwap underwent a full audit by Certik, which adds credibility to the launch and potentially explains the massive TVL. However, pseudonymous Twitter user “Banteg” pointed out that the DEX could easily “pull the rug” on its users.

All liquidity can be easily stolen by a single address. Why did people put over $120 million in it again? pic.twitter.com/ONOKyYbjts

At the time of writing, the TVL is still hovering around $1.5 billion, with three new pairs added to the platform on July 12.

While these developments are crucial, the retail is mostly anticipating the virtual event scheduled on July 20. This plan was first announced by a Shiba Inu influencer who goes by the Twitter screen name “Shytoshi Kusama” on July 6.

I am so excited to announce that we are throwing a Virtual Shiba Inu Party in 2 weeks featuring an amazing DJ set by @garethemery! Not only that… the set comes with an NFT AND physical sculpture that will be stored in a location TBA so #ShibaArmy can see it.

Interestingly, from a technical perspective, Shiba Inu price looks ready to reverse, which adds credence to the optimism around the upcoming virtual party. While investors could be looking forward to the July 20 event, things could turn awry really quickly if the holders are not careful.

Investors need to note that an upswing could originate at either of the levels mentioned above. In some cases, Shiba Inu price might continue to head lower until it retests the range low at $0.00000518, where the buyers could ignite a rally. 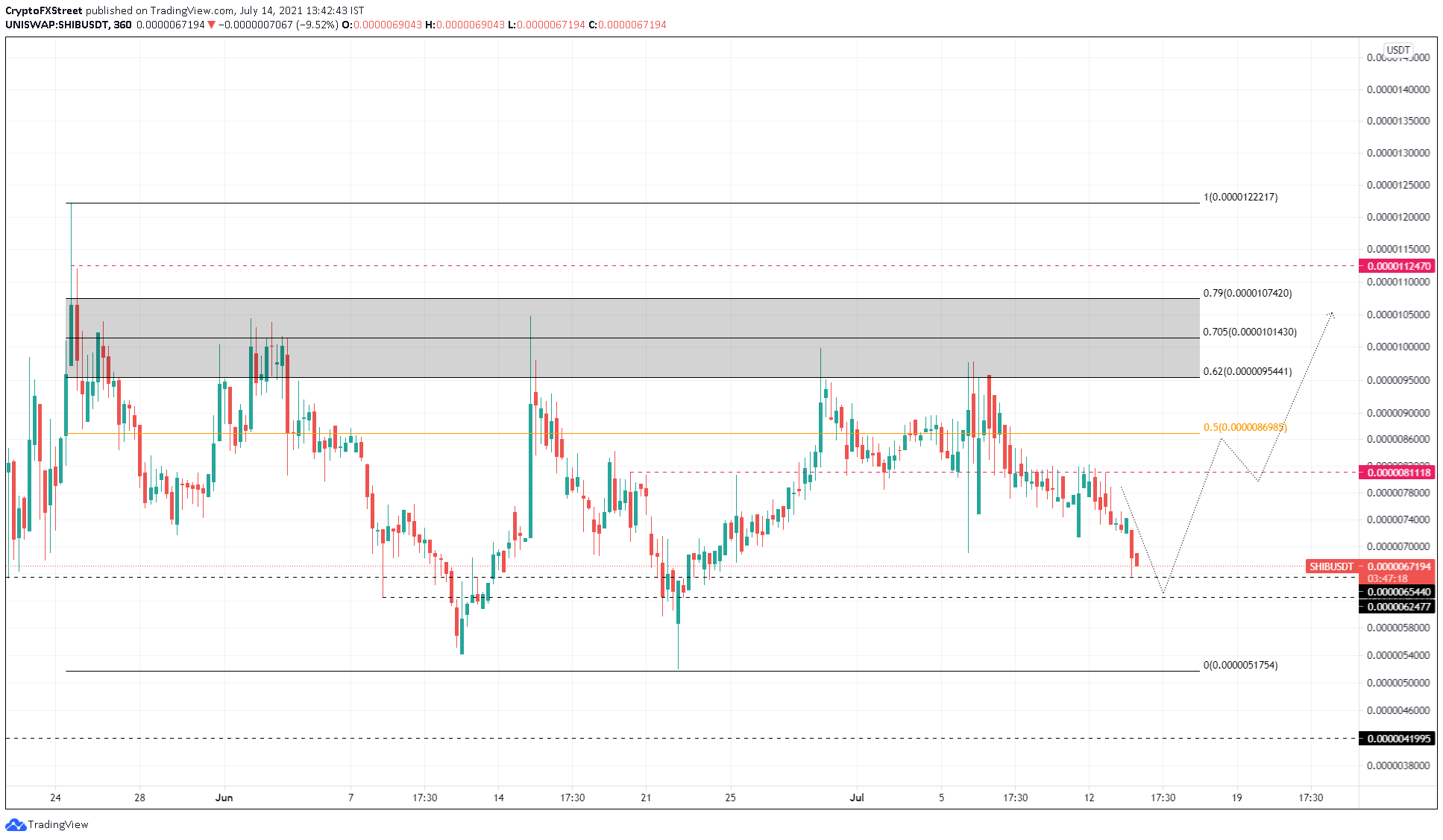 A perfect example of this is Dogecoin holders’ disappointment during Elon Musk’s much-anticipated appearance on Saturday Night Live on May 8. Dogecoin price, which was expected to pump, reversed and corrected 42% between May 8 and May 9.

Similarly, Shiba Inu price might appreciate the days leading up to the virtual party on July 20, but it is likely to dump on or during the event. If this were to happen, leading to a breakdown of the range low at $0.00000518, it would deter the uptrend.

If the buyers fail to push Shiba Inu price higher and reclaim the said level, it will invalidate the bullish thesis and potentially trigger a 20% correction to $0.00000420.