There has been a lot of buzz in the Cardano [ADA] ecosystem. IOHK, the development team behind the blockchain, announced that the long-anticipated Alonzo White went live on the 15th of July.

IOHK revealed successfully forking the Alonzo testnet to the new Alonzo White node to bring about several new capabilities along with running performance benchmarks. The Cardano ecosystem had previously announced the Alonzo rollout plan which comprised of a color-coded series of tenets – Alonzo Blue to Alonzo Black.

The first phase started with Alonzo Blue which went live on the 27th of May this year. Initially, this phase was supported by a small group of SPOs, partners, and Plutus Pioneers. Alonzo White is the second phase which will set the stage for the participation of stake pool operators, pioneers, and about 500 members of the Cardano community in the network. This phase will also include

IOHK further notified that it will monitor the new network closely over the next 24 hours. Following this, the team will review any feedback/results the next day and begin addressing any necessary fixes. IOHK also expects a number of updates as its plans to add features to Alonzo White. 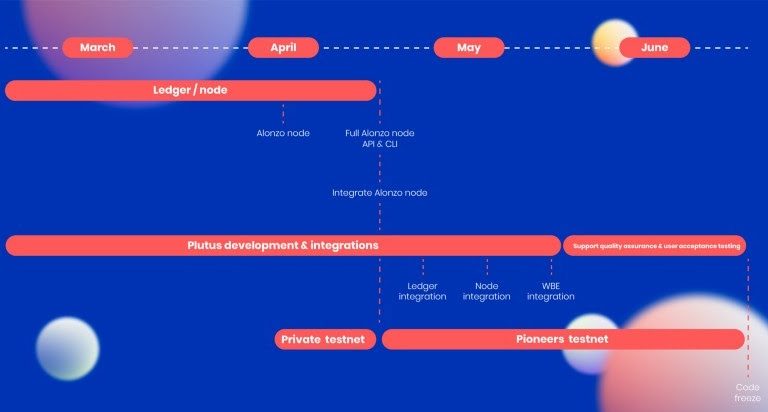 EMURGO had earlier described the hard fork as,

“With the Alonzo hard fork coming up on the road towards the Goguen era, developers will be able to start trying out decentralized applications in a testnet and ready Cardano’s network for the mainnet launch of smart contracts.”

Besides, the testnet will be fully public once the Alonzo white rolls into purple. Alonzo Purple, which happens to be the next phase, is reportedly scheduled for August. This launch will feature the first major public testnet that will see the participation of all pioneers.

It will also involve testing of the Explorer and Daedalus Flight components, examined in addition to the network’s overall stability. The team behind the development of ADA blockchain also expects to have several functionalities ready by September this year.

Alonzo Reed and Alonzo Black will the be last two stages of the entire release.

There is a lot of bullishness around Cardano. Since its inception, the network has jumped through hoops to achieve the goal of its ambitious roadmap Cardano. Starting from jumping into the NFT boom to the pioneer programs and the rapid stride of its staking statistics, the space has gained tremendous traction which has rightfully translated into its ADA’s price action.