Chris Larsen, the CEO of Ripple (XRP) just got noticed in a podcast for his statements against Dogecoin. According to him, the token, which itself cultivates a certain cult of uselessness, would in fact be dangerous for the crypto landscape. But above all for investors who invest their savings there.

After Jackson Palmer’s statements two weeks ago, this new intervention could segment the crypto market even further. Between the pro Dogecoin on one side and the anti on the other.

Dogecoin: A Game of Chance?

Regularly accused of influencing the price of Dogecoin, Elon Musk denies using it to his own advantage.

Chris Larsen’s warning could be in one sentence. According to him, buying Dogecoin would be like playing in the casino.

In a pictorial metaphor, Larsen presents the foundations of the Doge as built on sand. A point of view already shared by a large number of crypto players such as entrepreneur Charles Hoskinson or Barry Silbert, CEO of Digital Currency Group. An element that the founders and aficionados of the Doge do not dispute. They believe it is precisely this uselessness that creates investor value and attachment to the Doge.

For Larsen and for all critics, it also seems very difficult to separate the price of Dogecoin and Elon Musk. The American billionaire, CEO of Tesla and Space X groups is also often highlighted as the number 1 crypto influencer in the world. Through his numerous, sometimes enigmatic tweets, the CEO seems to be making rain and shine on the Doge. The CEO of Ripple believes that the main risk to be held by the Doge would lie on this axis. According to him, Musk could drop his strong support for Dogecoin overnight. As he was able to do with Bitcoin.

To drive the point home, Larsen once again put forward the Proof of Work protocol, heart of the Dogecoin system. A mention that allows you to skillfully introduce, without having to say it, that Dogecoin is not a green crypto.

Dogecoin and Crypto World: The Gap Is Widening

After recent statements from Jackson Palmer, one of the co-founders of Dogecoin, this new episode seems to widen the gap between Dogecoin and other crypto projects even more. An image that the Doge could seek to cultivate even more clearly in the long term. An image that he could also benefit from. By branding itself as crypto versus crypto.

As a reminder, two weeks ago, Palmer threw a stone in the pond when he spoke of the cryptocurrency market. According to him, this market would be “hyper-capitalist”And would contribute to enriching the richest while impoverishing“ those who have fallen into the mirage ”.

On the side of “pro-Dogecoin”, it is also argued that detractors do not grasp the power of the same.

Feedback on the Recent Dogecoin Price

For the past few months, the Doge has been on a slippery slope. With a price which has lost more than 70% compared to its historic highest level. An ATH recorded on May 8 for a price close to 0.73 USD.

The logarithmic graph below shows the evolution of the price of Dogecoin over the last 3 months. With a downtrend clearly visible. 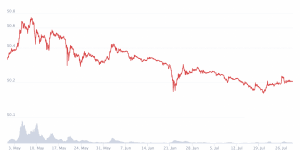 Despite this sharp drop, Dogecoin remains a project firmly anchored in the top 10 of the most important crypto projects. With a capitalization that still exceeds $ 26 billion. For its part, Ripple is in sixth position for a market cap above $ 32 billion.

Good to know : At its peak, Dogecoin’s capitalization was around $ 90 billion. Compared to the market of the day, such a capitalization would make the Doge, the third crypto project in the world.

While the trend of the past few days is fairly neutral, this is not all good news for the Doge’s supporters. Indeed, Dogecoin has remained rather stable as Bitcoin has seen a significant week of rise. Worrisome when we know the propensity of the most famous crypto to pull the market according to its own evolution.