SafeMoon price is in a downside consolidation mode near multi-month lows of $0.000001934, briefly pausing three straight days of heavy declines.

Bears take a breather this Saturday, contemplating the next move, with technical and fundamental factors sending caution signals. The meme-based coin is down over 10% on the day.

SafeMoon optimists are seemingly waiting for that one ray of hope to lift SAFEMOON price from the ongoing downbeat momentum.

That said, the SafeMoon developers have revealed August 7 as the beta launch of its Android-specific mobile wallet, which could emerge as the much-needed bullish catalyst to end the losing streak.

SAFEMOON/USD: At a critical juncture

SafeMoon price brought an end to its ten-day-long range trade at lower levels, following a daily closing below the rising trendline support at $0.00000236 that validated a bear flag formation.

The downside breakout accelerated the downside, triggering steep losses while opening floors towards the pattern target measured at $0.0000012.

The consolidation that followed SAFEMOON’s downtrend from the June 29 high of $0.00000352 had carved out a bear flag pattern on the daily chart. 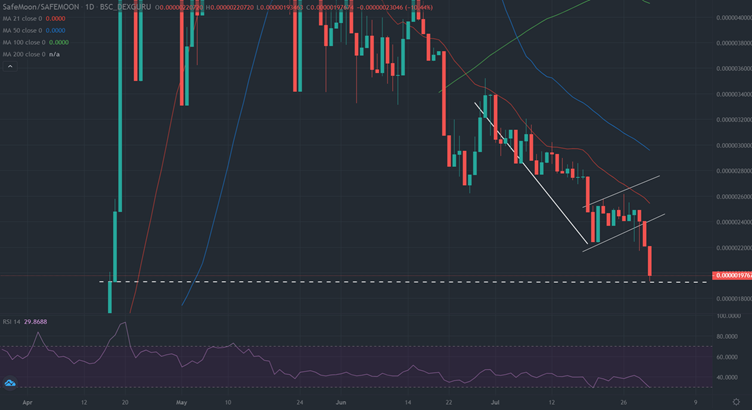 However, with the 14-day Relative Strength Index (RSI) peeping into the oversold region, currently at 29.81, a rebound from the key horizontal (dashed) trendline support near $0.000001930 cannot be ruled out. That level is the confluence of the daily and April 18 lows.

Subsequently, if the buyers manage to seize control, then they could lookout for a recovery rally towards the pattern support-turned-resistance, now at $0.000000241.