The crypto space is currently going on with a roller coaster ride as most of the tokens are experiencing a tough time in sustaining above certain levels. No doubt the current market trend is pretty bullish, yet assets like Bitcoin, Ethereum, Cardano, etc fail to smash the immediate target. Yet among them, some altcoins showcase a huge tendency to hit higher highs in a coming couple of days.

ATOM/USD pair is showcasing immense bullish momentum after it flipped the bottom levels at $18.29. After smashing the highs at above $38, the price initiated with a healthy consolidation that also includes slight selling pressures also. And despite a minimal pullback, the ATOM price is still above $35.

The price with a rebound appears to have following a pattern. With a sufficient uptrend, the price quickly enters consolidation. However, after a healthy accumulation, the price pulls its next leg up towards new highs. And hence the possibility of breaking this consolidation appears more by forming yet another ATH soon.

Chainlink price, currently, attempting very hard to smash the immediate resistance levels at $29.17. The price still hovers around the consolidation after the recent massive sell-offs which drained nearly $10. Yet the price is recovering bit-by-bit and could trend above $30 in the next few hours.

Currently, the price is trending within a symmetrical triangle and approaching its peak. The price tends to explode as the peak triggers the upcoming rally. But the direction of the price momentum will not be known. And hence maintaining a positive take, the price could eventually break the upper barrier and move towards the north.

The XTZ price appears to have to trend inversely parabolic by shedding more gains. It was expected that the altcoin could revisit lower lows, yet with a regaining momentum, the speculation of a bearish trend is extended to some extent. The buying pressure currently appears to have been accumulated that eased the sell-off.

The trading volume remains has not much depleted as for the reason the price is receiving enough strength to surge. Also, a small bounce is witnessed with the RSI and the MACD is also showing ease in the selling pressure. And hence the buyers could eventually jump in any time from now to uplift the price.

The asset was falling into a bearish divergence for the past couple of days. However, a notable rebound prevented from incurring a further loss. The price is currently gathering immense bullish momentum as the buyers have already jumped in.

Interestingly, the trading volume also has managed to surge, creating more fluctuations in price and the trend. The volume is expected to increase very soon which may assist in the price to regain the lost positions.

Collectively, with the drop in Bitcoin dominance, many altcoins have inculcated a bullish trend. And hence, altcoins like ATOM, LINK, XTZ, ONE etc, could reach high very soon in the current bull market. Also, BTC & ETH prices which are swinging in a narrow trend could break the barriers soon. YouTuber Scott Melker who uses the pseudonym ‘The Wolf Of Wall Streets’ on Twitter, retweeted an old tweet that highlighted potential trade ideas on ATOM, AVAX, EGLD, and SUSHI.

I did a quick video yesterday with $BTC thought, but more importantly potential trade ideas on $ATOM $AVAX $EGLD and $SUSHI.

Still relevant today.https://t.co/E8YDJwcuje— The Wolf Of All Streets (@scottmelker) August 18, 2021

Melker’s retweet comes after a series of new all-time highs from altcoins and a drop in the Bitcoin dominance metric. Regarding this, ‘The Wolf Of Wall Streets’ was convinced that an alt season has started.

Currently, the BTC rally has delayed out around the $47,000 price level. More so, the analyst said that this phase of sideways trading allows altcoins to step forward.

In addition, the crypto analyst insisted on Cosmos (ATOM). Besides, he shared a chart showing the ATOM token bullish trend. According to CoinMarketCap, the ATOM token hit a new all-time high of over $41 in the last 24-hour period. As a result, it surged by over 11% in the past 24 hours. And buy over 22% in the past 48 hours.

At press time, Cosmos (ATOM) is trading at $39.26 on CoinMarketCap. Moreover, Cosmos describes itself as a platform that solves some of the “hardest problems” facing the blockchain industry.

To specify, the project strives to provide an antidote to “slow, expensive, unscalable and environmentally harmful” proof-of-work (PoW) protocols. A prominent crypto strategist and trader says that he sees one emerging altcoin following the explosive price action of smart contract platform Solana.

Pseudonymous trader Inmortal tells his 66,600 Twitter followers that he’s looking at Cosmos (ATOM), a project that aims to help developers build different blockchains that can transact and exchange data, creating a decentralized internet of blockchains. According to the crypto analyst, Atom will be the next Solana (SOL), a crypto asset that has meteorically risen nearly 350% in the last 30 days, according to CoinGecko.

“FOMO (fear of missing out) will start soon. ATOM.”

The crypto analyst is also looking at Cosmos in its Bitcoin pair (ATOM/BTC). According to Inmortal, ATOM/BTC must flip 0.00055 ($25) resistance into support to ignite a parabolic rise in value.

“One of the biggest accumulation ranges in ALT/BTC pairs, (+800 days). When ATOM finally flips this KEY level, I think we’ll see some fireworks.”

Inmortal is also keeping a close watch on the price action of Ethereum (ETH). The crypto analyst believes ETH’s move below $3,400 is an opportunity to buy the dip.

Cosmos price delayed its advance due to the recent market crash, but bulls are resilient and have already begun the upswing.

Cosmos price on the verge of confirming another rally

Cosmos price began its multi-month consolidation forming lower highs and higher lows after surging nearly 530% since 2021. While the initial spike in ATOM’s market value created the flagpole, the range-bound move that followed is known as the pennant.

Together, the technical formation is known as a bullish pennant and forecasts an 85% bull rally, determined by adding the flagpole’s height to the breakout point at $22.62.

Supporting this optimistic outlook is a 38% surge in ATOM price after yesterday’s dip. Such a quick reversion indicates that buyers are scooping the altcoin at a discount.

Although a decisive close above the upper trend line of the pennant at $22.62 will signal a breakout, a secondary confirmation will arrive after ATOM price clears the supply zone that extends from $26.18 to $28.64.

Surpassing the resistance level at $35.2 is crucial for Cosmos price to hit the intended target at $41.66. 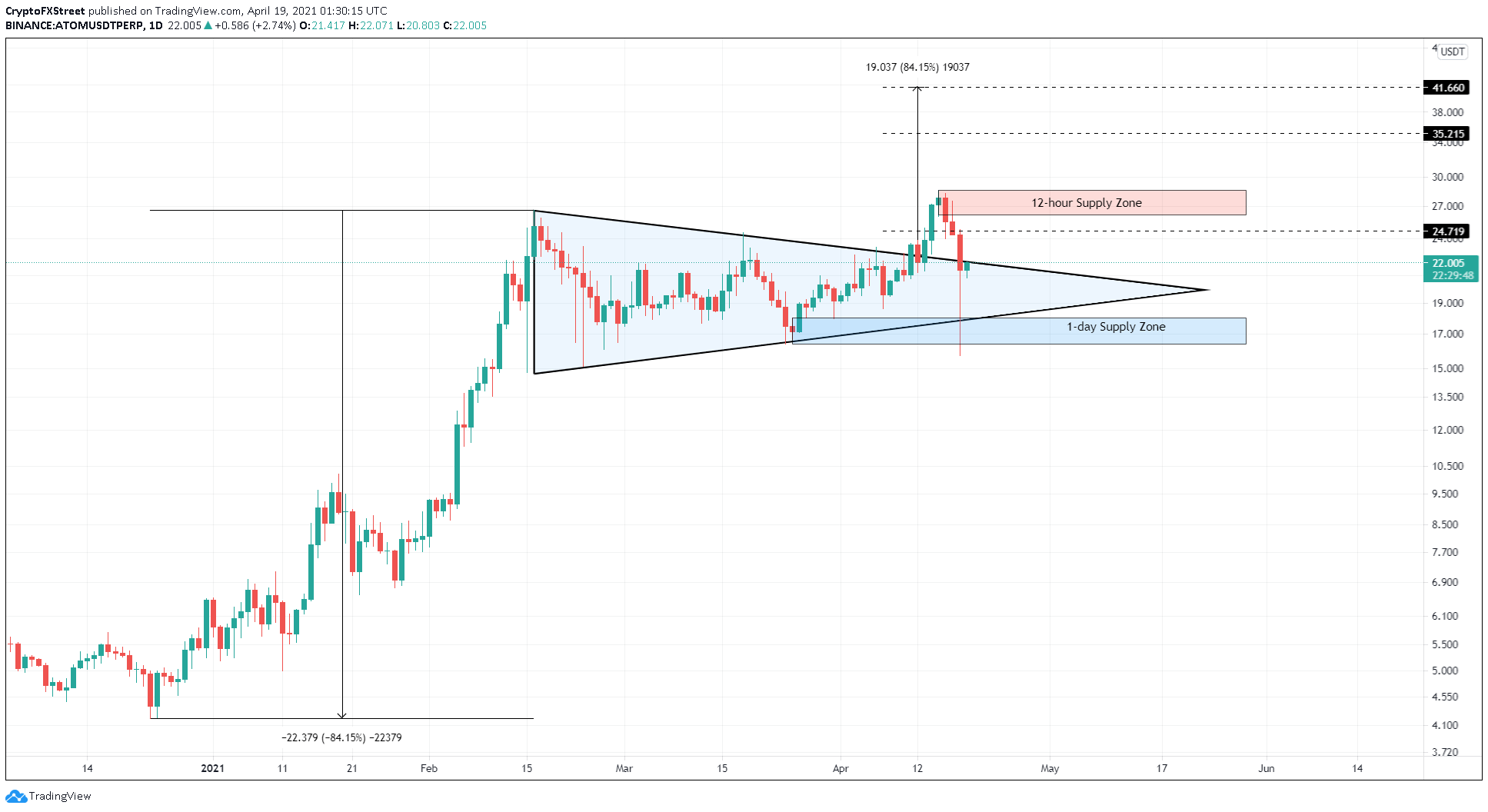 On the flip side, if the buyers get rejected at the pennant’s upper trend line or the supply zone, a move into the consolidation phase’s lower boundary seems likely. If ATOM slices through the demand zone stretching from $16.37 to $18.02 to produce a daily candlestick close below it, the bullish thesis will face invalidation.

Under these conditions, market participants can expect Cosmos price to start a new downtrend to $15.7, which is the low of yesterday’s crash or $15.10.