Chiliz token at the monthly chart is trading on a bearish note while making lower lows and lower highs. The crypto asset is currently placed below the 20, 50, 100, and 200-DMA lines. At the same time, 20 and 50-SMA are heading for a bearish or negative crossover, creating more downside. On the other side, the volume is significant to watch in upcoming trading sessions as a declining below-average volume line.

Currently, DOGE is CMP near monthly lows, and volume activity is also lower, improving for forthcoming trading sessions. If the coin fails to regain its 200-DMA line, we can expect a short-term correction in forthcoming sessions. Support on the lower side is $0.2620 and $0.2410, whereas resistance on the higher side is $0.3425 and $0.3690.

Chiliz token is now trying to sustains, after facing a sharp selloff

Chiliz token on the weekly chart is now trying to sustains, after facing a sharp selloff. On the other side, the technical parameters are reaches near the oversold zone, and we can expect some bounce back in upcoming trading sessions. Volume at the 4-hour time frame is lower and needs to improve enormously for a strong rebound. CHZ’s price is trading at $0.2868 with an intraday action of -10.93%, and the volume to market cap ratio is at 0.1461.

Relative Strength Index (OVERSOLD): Chiliz token RSI is trading under the oversold zone over the weekly chart. The RSI is trying to rebound after a sharp fall from the higher side, and a minor pullback is expected, CMP at 29.

Chiliz Price Analysis: This Price Pattern Will Shape The Next Rally In CHZ Token

The CHZ token maintains a bullish trend in its technical chart. The coin price is currently stuck in a correction phase, and the price is still wavering above the $0.43 support. Furthermore, the coin presents descending triangle pattern, whose breakout should give a directional move in the chart.; 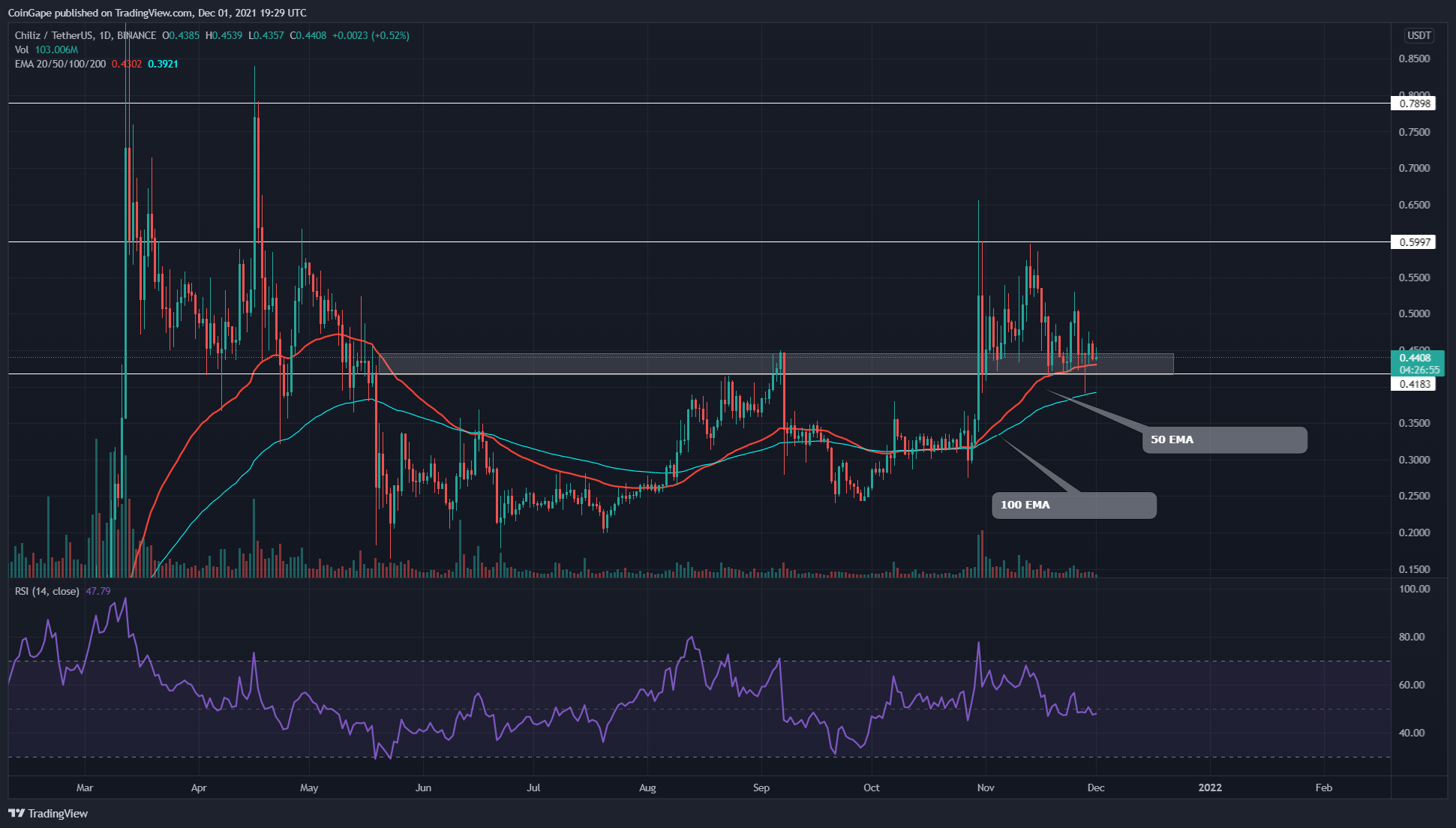 On October 30th, the CHZ token indicated an excellent opportunity for the crypto traders when the price breached a crucial resistance of $0.44-$0.42. This new rally was rejected from the $0.6 mark, and the price entered into a minor retracement phase.

The coin price plunged to the $0.43 mark to check for sufficient support from this level. Moreover, the technical chart also reveals a cup and handle pattern, with the neckline at the $0.6 mark.

The crucial EMA’s(20, 50, 100, and 200) states an uptrend for this token, as its price trades above all these EMA lines. The Relative Strength Index(47) presents a bearish sentiment within the price. 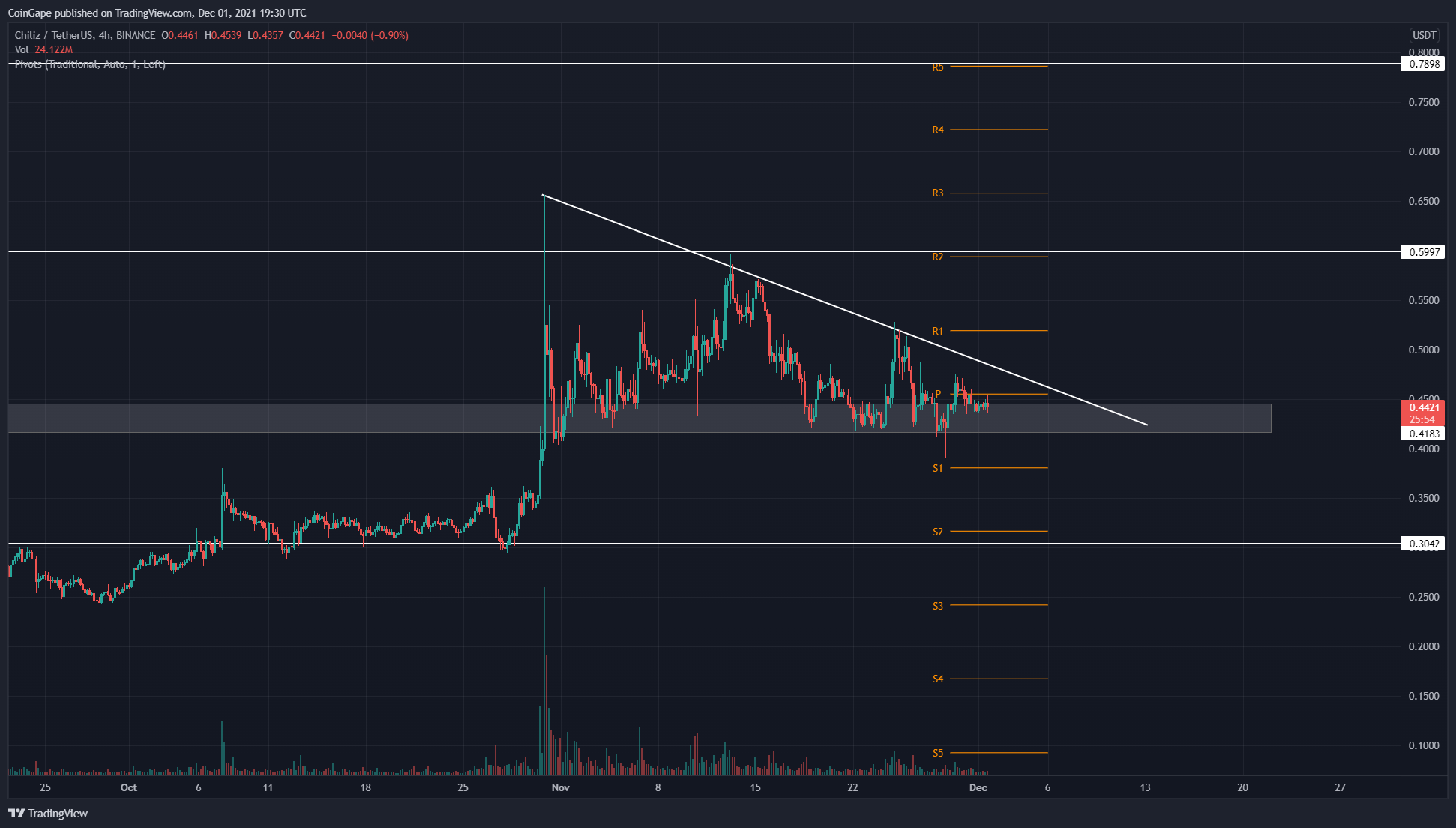 The CHZ token shows a descending triangle pattern in the 4-hour time frame chart. The neckline for this pattern is at $0.42, holding this great short opportunity for crypto traders. However, even though this is a bearish pattern, the daily chart suggested this pattern is a part of a retracement phase.

Therefore, these traders should wait for the price to breach the neckline or overhead resistance trendline to confirm which way the rally wants to continue.

Chiliz (CHZ) Price Can Surge More Than 30% On Successful Breakout

The CHZ coin price has increased by over 94% in the last three weeks. The altcoin could see a big bull run if it reclaims the $0.58 resistance level. Chiliz is now worth $0.56, down 36.23 percent from its all-time high of $0.88. At the time of writing the token is trading up with 5 percent gains in the last 24 hours.

Chiliz Price is currently undergoing a retest, and if the price can stay above the pattern neckline, it will have a greater chance of reclaiming the $0.58 barrier. Furthermore, the MACD indicator indicates that this coin is going above the neutral zone, indicating bullish momentum.

The debut of live in-game NFTs and a quickly growing ecosystem enhanced CHZ’s pricing and demonstrated the project’s solid fundamentals.

The advent of new exchange listings, as well as its freshly launched fan tokens for teams, have all contributed to CHZ’s growing popularity.

Another new trend that may be boosting CHZ’s fundamentals is ecosystem expansion. The platform recently announced a relationship with Kraft Sports and Entertainment, which will see the New England Patriots of the National Football League (NFL) and the New England Revolution of Major League Soccer (MLS) join the Chiliz and Socios ecosystem.

Chiliz announced a collaboration with the Italian Football Federation (FIGC) to establish a blockchain fan token and incentives program for the national team on Socios.com. The current UEFA Euro 2020 champion is the Italian side.

The launch of live in-game NFTs and a rapidly expanding ecosystem boosted the price of CHZ and showcased the project’s strong fundamentals.

This year has seen a number of high profile partnerships formed between the cryptocurrency sector and major sports leagues, teams and individual players. Nowadays players engage with their fans by issuing limited edition NFTs and other perks that are associated with crypto and blockchain technology.

One project that has seen a recent surge in interest thanks to its focus in the world of sports and helping fans interact with their favorite teams and players is Chiliz (CHZ), the blockchain network behind the Socios.com fan engagement platform.

Data from Cointelegraph Markets Pro and TradingView shows that since hitting a low of $0.243 on Sept. 29 the price of CHZ spiked 171% to a daily high at $0.657 on Oct. 31 and recent developments are now pushing the price back towards the swing high.

Three reasons for the growing strength of CHZ include the launch of live in-game NFTs, recent exchange listings for CHZ as well as its newly released fan tokens and the protocol’s rapidly expanding ecosystem of partners.

The development that kicked off the current rally was the rollout of the platform’s first live, in-game NFT drop which took place a match between A.C. Milan and A.S. Roma.

This Sunday, history will be made as we release the first ever @acmilan NFT.

With this design, new NFTs are minted as they happen based on key moments in live matches and then they are dropped to the wallet of fan token holders who correctly predict the outcome of the game.

The announcement that this new method of distributing NFTs was followed by a spike in demand for the token which has continued to build in the following weeks.

Another reason for the building momentum of CHZ has been the addition of new exchange listings, as well as its newly released fan tokens for clubs like São Paulo FC, AC Milan and Manchester City.

In addition to the listings, Binance is also allowing fans to earn tokens from their favorite teams by staking Binance Coin (BNB), Binance USD (BUSD) and CH.

OKEx also announced that it will support tokens from the Chiliz ecosystem and CHZ appears to have benefited from a new listing eToro’s crypto exchange on Nov. 9.

Ecosystem expansion could be another recent development that is strengthening CHZ’s fundamentals.

This partnership marks the first foray for Chiliz into the NFL and MLS and indicates that the protocol has its sights set on expanding to cover all major sports leagues where there is a demand from fans for more engagement.

VORTECS™ data from Cointelegraph Markets Pro began to detect a bullish outlook for CHZ on Oct. 28, prior to the recent price rise.

As seen in the chart above, the VORTECS™ Score for CHZ began to pick up on Oct. 27 and reached a high of 70 on Oct. 28, just as its price began to increase 125% over the next two weeks.