Binance Coin price analysis suggests return to $600
The closest support level lies at $560
BNB faces resistance at the $580 mark
The Binance Coin price analysis shows that the buyers defended the $560 support level causing the markets to observe a bullish takeover for BNB. At press time, BNB has recovered to the $573.00 mark with the bullish momentum rising in recent hours

The broader cryptocurrency market has observed a bearish market sentiment over the last 24-hours as most major cryptocurrencies record negative price movements. Major players include ICP and VET recording a 5.42 and 4.36 percent decline respectively.

Across the technical indicators, the MACD is currently bullish as it has just expressed a bearish crossover observed in the color change of the indicator. The indicator had previously climbed to the bullish territory on 19 November, where it stayed till today. However, as the indicator has just exhibited a crossover, the momentum is low, and the indicator may turn bullish again if BNB is able to climb above the $580 mark.

The EMAs are currently trading close to the mean position as the Binance Coin price analysis shows a stagnating price action across the mid-term charts with little net movement through November. Currently, the two EMAs are both moving horizontally as BNB oscillates around the $570 mark.

The RSI is currently trading in the neutral region, hanging close to the mean position highlighting the lack of momentum on both sides of the market. The indicator trades at 47.56, showing a slight bearish bias across the short-term charts.

The Bollinger Bands are currently narrow as they converged around the $580.00 mark across the last 24-hours. The indicator’s bottom line at $565 provides a support level for the price action, while the mean line at $582.00 presents a resistance level to the bulls. If the bulls are able to break above, the next resistance level lies at the $600 mark.

The 24-hour Binance Coin price analysis accentuates this sentiment and issues a sell signal with 10 of the indicators supporting the sellers against only six indicators suggesting an upwards movement. The analysis shows strong bearish dominance across the mid-term charts. At the same time, ten of the indicators do not support either side of the market and stay neutral.

The Binance Coin price analysis shows that BNB has been stuck in limbo around the $580.00 price level. Despite making attempts at breaking above and below the level, neither side of the market has been able to initiate a rally at the level. However, as the bulls gain momentum across the short-term charts, the price may start rising again.

Currently, traders should expect the price to observe a bullish breakthrough towards the $600 mark as the short-term technical indicators suggest a bullish takeover across the markets. While the mid-term technical analyses are bearish, it is because they are yet to react to the recent price movements. BNB/USD are traded at 617.13 and continue to move as part of the correction and the formation of the ”Wedge” model. Moving averages indicate a short-term bearish trend for Binance Coin. Prices broke down the area between the signal lines, which indicates pressure from the sellers of the asset and a potential continuation of the fall from the current levels. At the moment, we should expect an attempt to develop the growth in the value of a digital asset and a test of the resistance level near the 620.05 area. Where can we expect a rebound again and the continuation of the fall in the Binance Coin rate with a potential target below the level of 520.05.

In favor of reducing the BNB/USD quotes, a test of the resistance line on the relative strength index (RSI) will come out. The second signal will be a rebound from the upper border of the Wedge reversal pattern. Cancellation of the option to reduce the coin will be a strong increase in the value of the asset and a breakdown of the 685.05 area. This will indicate a breakdown of the resistance area and a continued rise in the cryptocurrency rate with a potential target above the level of 735.05. With the breakdown of the support area and closing of quotations below the level of 605.05, we should expect confirmation of the development of a downward impulse on Binance Coin and the start of the ”Wedge” model.

Binance Coin Forecast December 3, 2021 implies an attempt to correct and test the resistance area near 620.05. Where can we expect a rebound and the continuation of the fall in BNB/USD to the area below the level of 520.05. An additional signal in favor of reducing the Binance Coin coin will be a test of the trend line on the relative strength index (RSI). Cancellation of the fall option will be a strong growth and a breakdown of the 685.05 area. This will indicate a continued rise in the cryptocurrency with a target above the level of 735.05.

Binance Price Analysis: The BNB Traders Could Expect A Significant Rally If The Coin Price Reclaims The $670 Resistance The BNB coin presents an overall uptrend in its technical chart. This coin has recently obtained good support from the $510 mark, and now it aims to breach the All-Time High resistance of the $670 mark. The crypto traders could wait for the price to give a decisive breakout from this level to expect a strong directional rally. 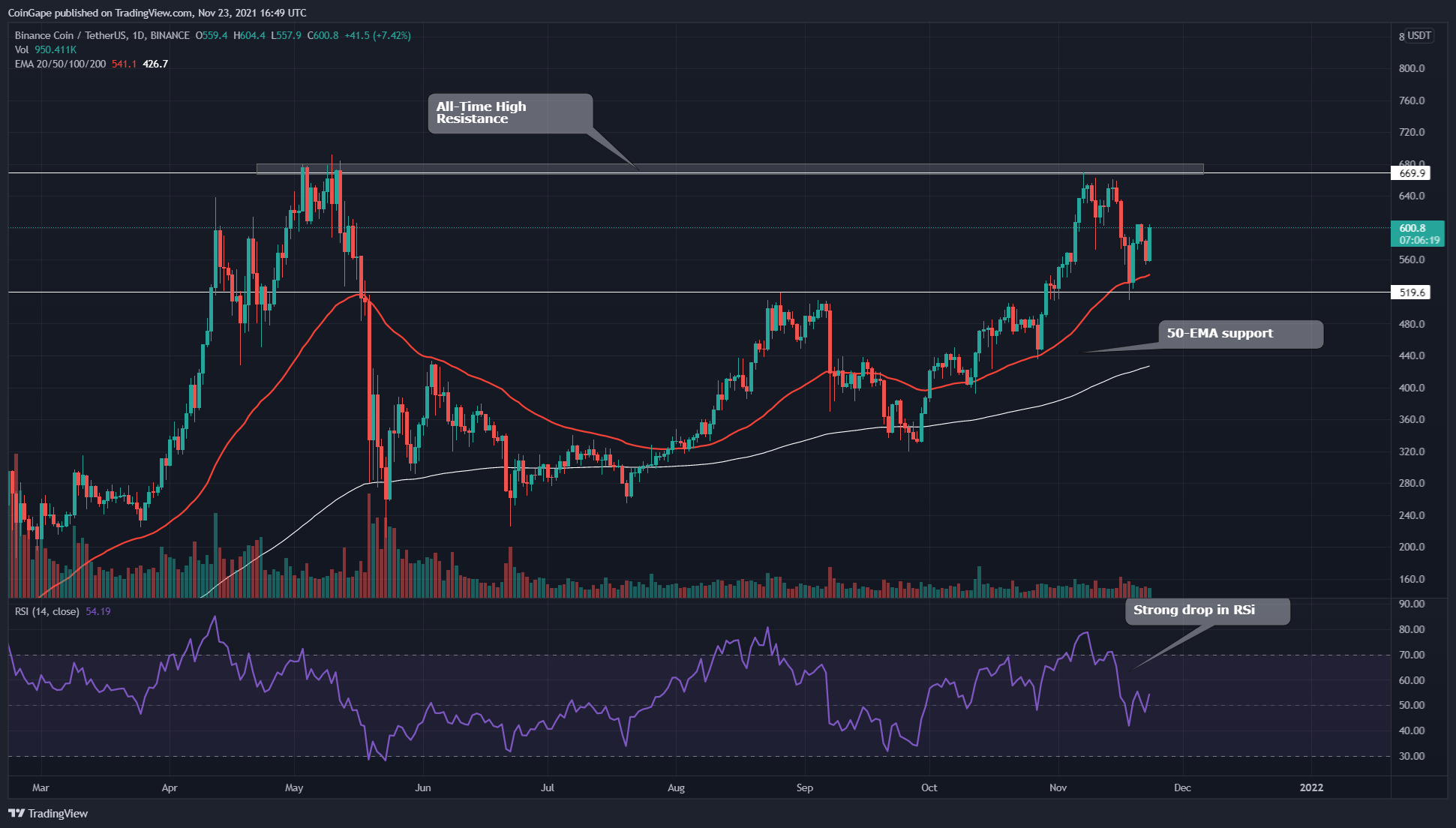 The BNB coin indicated an excellent opportunity for crypto traders when the price breached its previous swing high resistance of $520 on October 29th. The coin started rallying and retested the ATH resistance of $670 only to face strong resistance from this level.

Thus, the rally entered a correction phase, which dropped the price back to the $520 mark, this time to obtain proper support from it. The coin displays sufficient support from this level in order to resume this uptrend.

The exponential moving average(EMAs) confirms a bullish trend in the BNB coin, as its price is trading above the 20, 50, 100, and 200 EMA lines. Moreover, The Relative Strength Index(74) displays a significant drop in its RSI line, which must have stabilized the coin to continue its rally. 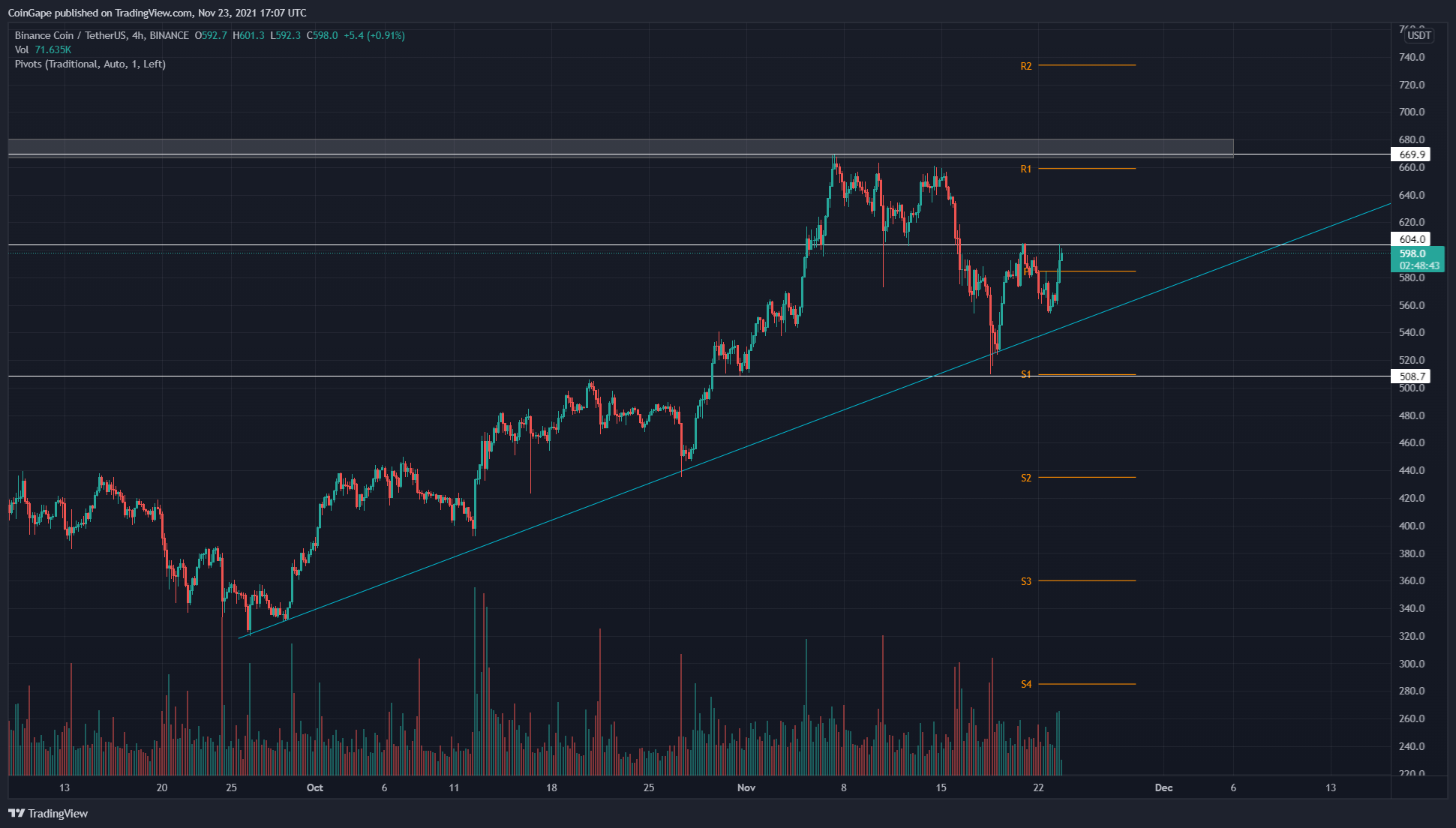 This lower time frame chart shows a steady rally in the BNB coin. Moreover, the coin price seems to be respecting the level of an ascending trendline leading this uptrend since late September.

Thus, crypto traders can use this support trendline to find good long entry opportunities. However, this will also serve as a great early signal if the price starts moving otherwise.

The 5 Most Popular Cryptocurrencies on the Market Right Now You might think that Dogecoin and Shiba Inu would be sitting at the top of the cryptocurrency world will all the buzz they receive. But that’s not the case– at least not based on where investors are actually putting their money.

The most objective way to determine the top cryptocurrencies is to look at their market caps. For digital coins, market caps are calculated by multiplying the current price times the circulating supply. Here are the five most popular cryptocurrencies on the market right now, according to CoinMarketCap.

There’s absolutely no surprise whatsoever that Bitcoin  still reigns as the world’s most popular cryptocurrency. Its market cap currently stands at nearly $1.1 trillion. If Bitcoin were a company, it would be bigger than Meta Platforms (formerly known as Facebook) and Tesla.

Bitcoin continues to enjoy the advantage of being the first cryptocurrency. It’s more widely accepted than any other digital coin, mainly because it’s been around longer. Bitcoin is even viewed by some investors as a good hedge against inflation since there will never be more than 21 million Bitcoin tokens in circulation.

Ethereum  ranks as a somewhat distant No. 2 to Bitcoin on the list of the most popular cryptocurrencies. Its market cap is hovering around $500 billion, less than half the size of Bitcoin. But some believe that Ethereum will be the next Bitcoin.

The key edge for Ethereum is its real-world utility. Its blockchain supports smart contracts that can be used in a wide range of applications. In particular, Ethereum is well-suited for creating non-fungible tokens (NFTs). Whether or not the cryptocurrency knocks Bitcoin out of the top spot in the future, Ethereum appears to be in a good position to stand the test of time.

Binance operates the biggest cryptocurrency exchange in the world. It makes sense, therefore, that Binance Coin  is the third-most-popular digital coin on the market. It’s the native coin on the Binance exchange and currently has a market cap of over $96 billion.

Investors who pay transaction fees with Binance Coin receive discounts. Each quarter, Binance reduces the supply of the digital coins based on trading volume. Over time, these quarterly coin “burns” will remove 100 million coins, which amounts to half of the total supply. These moves are intended to increase the value of Binance Coin.

Tether ranks as the No. 4 most popular cryptocurrency in the world. Its market cap is around $73 billion. But among stablecoins, Tether takes the top spot. All stablecoins tie their value to another asset. For Tether, that asset is the U.S. dollar.

In theory, Tether is like a “crypto-dollar” that should maintain its value in a similar way as physical U.S. dollars do. However, there has been some controversy over whether or not Tether has sufficient reserves to back all of its digital coins. The U.S. Treasury Department recently called on Congress to take action to address the risks that could be posed to the economy by stablecoins such as Tether.

Solana rounds out our list of the top five most popular cryptocurrencies. Its market cap currently stands near $65 billion. Solana has been the biggest winner of these top cryptocurrencies over the last year with a gain of well over 10,000%.

Many investors have flocked to Solana as an alternative to Ethereum. Both blockchains support smart contracts. However, Solana offers much faster processing speeds and lower transaction fees than Ethereum.